My new show consists of several "collections" of collage and assemblage, fancy words for putting a variety of miscellaneous junk together and calling it art.   I've been drawn to this form of art for a long time; maybe it started as a way to rationalize keeping boxes and boxes and piles and piles of miscellaneous junk instead of throwing it out.  But I have learned that miscellaneous stuff, no matter how appealing each piece may be when scrutinized closely, doesn't become art until you have a good way to fasten it together forever.

And for me, the go-to answer has always been to put the disparate parts into boxes.

I have been doing this for several years, mostly using pre-made new wood boxes that you get at the craft store, and several of those boxes made it into my gallery show.  But the project got turbocharged when Pamela Mattei, a long-time fiber pal, was seized by the desire to clean out her garage and basement during early pandemic lockdown.  Early last summer she gave me five huge cartons of old cigar boxes, which I immediately started filling up for art.

Some of the boxes had slide-off lids, which I slid off to use for other purposes, leaving me with six-inch cubes to wallpaper with maps, photos, book pages, sheet music, fabric or other flat stuff.  Then I populated the boxes with things that wanted to be together.

Here are some of the cigar-box cubes that made it into the show: 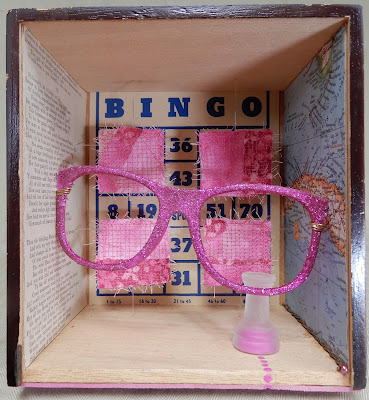 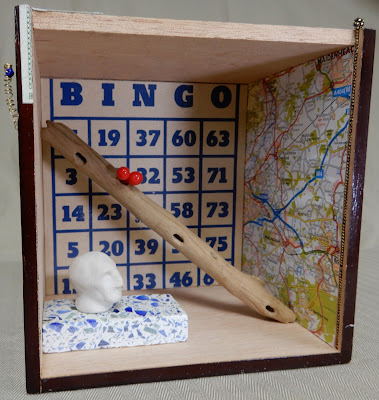 Some of the cigar boxes were hinged, and I took them apart to give more five-sided "rooms." 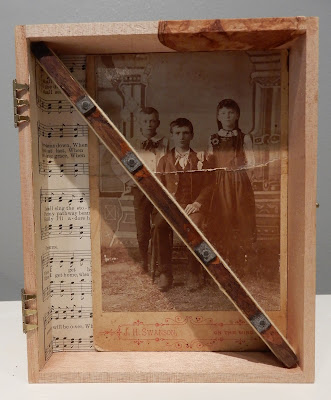 I'll show you more of my boxes in other posts.  Meanwhile, if you're near Louisville, I hope you can drop in and see my show at PYRO Gallery, 1006 E. Washington St.  Gallery hours are noon to 6 Fridays and Saturdays, 1-4 Sundays through the end of May, and by private appointment.

Posted by Kathleen Loomis at 12:07 PM