Daily art -- the end of a streak

Two weeks from tomorrow will be my last daily calligraphy.  After three years on this streak, it's time to stop.  I have accomplished a lot with this practice, although not what I intended to do when I started.  At that time I had just seen and fallen in love with the work of an Iranian artist, Golnaz Fathi, who used calligraphy, or maybe I should say marks that resembled calligraphy -- especially this painting:

I thought that in a year of writing I could figure out how to achieve a similar effect, that it was just a case of finding the right ink/paint and the right brush/pen and developing a personal style of making letters.  Turns out that in three years I have not yet achieved that goal, although I think I have come close a few times.

I have learned many things in those three years.  First, that I am much more comfortable using a pen than using a brush.  I keep buying new pen nibs to add to my already huge collection, jump-started with a whole lot of pens inherited from my father.  But while he went for bold pens with wide or ball-shaped tips, I have been going smaller and smaller, in search of pens that are very flexible, going from narrow to wide in a single stroke as you add pressure.  I love the old-fashioned look that you get from plain old script written with a small pen. 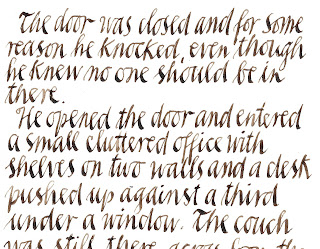 Second, that it's harder than you think to do asemic writing, the fancy-pants term for writing that doesn't have any meaning.  To do this well you need a repertoire of symbols that look like actual letters but aren't.  In three years I did a pretty good job of developing my own personal asemic script, which is also nicely suited to the thick-and-thin flexible pen. 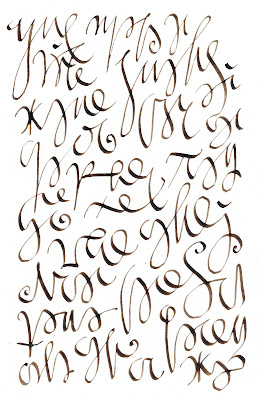 Third, despite the literal meaning of "calligraphy" -- beautiful writing -- I have become quite enamored of crude, non-beautiful writing.  It helps to have a pen or other writing tool that will produce irregular lines, maybe also some spatters, and that's not always easy.  My favorite beer-can pen got old and died last year, and a couple of new ones haven't given the same effect. 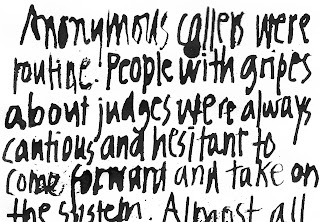 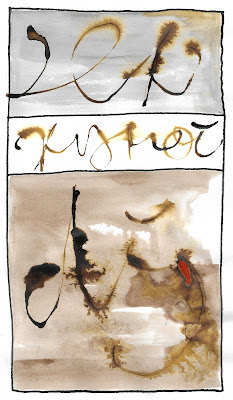 Finally, the closest I have been able to come to the pictorial quality of Fathi's work has been by writing wet-into-wet.  This technique will serve me well for next year's daily art: painting.  I'll tell you more in later posts.
Posted by Kathleen Loomis at 10:19 AM