I have not been dead, it just looks that way...

I am so embarrassed at how long it's been since I last posted.  June and July have been the busiest months in years and while I've kept up with the daily painting and the daily Instagram posts, I have sorely neglected my blog.  I guess that proves that, at least for me, making a commitment to daily art works much better than just trying to do something as frequently as possible.  I'll try to catch you up on what I missed telling you about at the time.

So the end of June was a marathon of getting a truckload of art ready to hang in my solo show at PYRO Gallery.  A bit more than half the pieces in the show were new work, made in the last two years.  The rest were older, but mostly never seen locally.  Among the very oldest was this quilt that appeared in the special "I Remember Mama" exhibit at the Houston Quilt Festival in 2003. 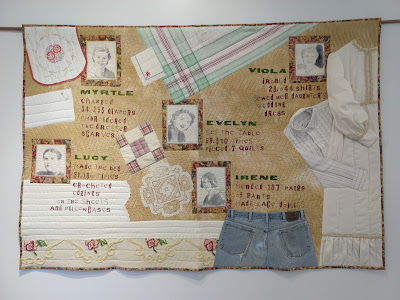 When I wrote an artist statement for the Houston show, it was pretty sweet -- kind of embarrassing to me as I read it again for the first time in almost 20 years.  I talked about women who "sit with our needles and contemplate our lives as we sew, finding joy, peace, and a brief respite from chores and chaos." 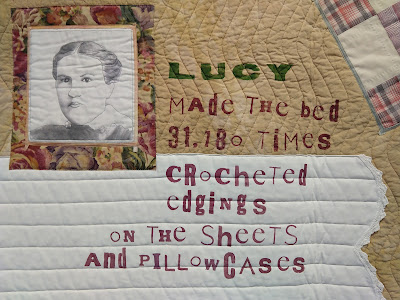 When I gave a couple of gallery talks during the run of my show, I found myself taking a different and darker tone.  I pointed out that household textiles come is two different varieties: as instruments of female drudgery, and sometimes as instruments of female creativity and pleasure.  I noted that the ladies on the quilt (three of them are actual people, including Viola, my mother; two are made-up names given to unidentified photos found in the family box) obviously spent a whole lot more time on drudgery than on creativity... 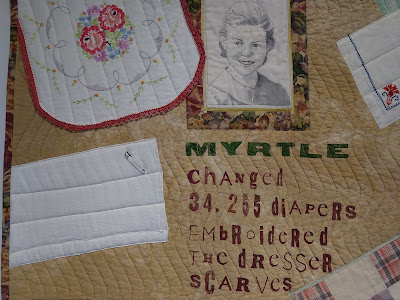 I was particularly happy that my sister was able to come for the opening of the show, and got to revisit her old wedding dress incorporated into the quilt. 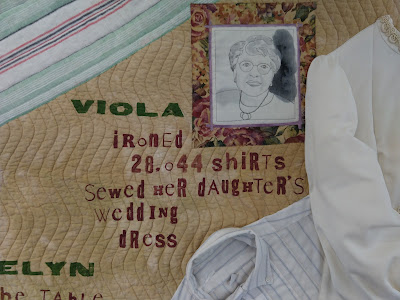 The marriage didn't last, but the dress sure did.  It was made of that luscious heavy, drapey polyester that was so popular in the early 70s and it will no doubt outlive every other piece of textile on the entire quilt, if not the entire world. You can see in the photo that I stuffed the long sleeve so it rises a good three inches off the surface of the quilt, and I was astounded to see that after 19 years on a shelf, the sleeve is still just as perky and wrinkle-free as it was when I folded up the quilt and stowed it away.   Go, polyester!   (Now, of course, people sneer at polyester, while loving microfiber, which of course is the same thing...)
On another note of remembrance, I couldn't help but think, many times during the show, of my dear friend Marti Plager, who died a year ago.  She had always loved this quilt and on many occasions urged me to find a way to get it up in public again.  A few times I almost did, and Marti was disappointed when it never happened.
So it finally happened, and I hope Marti got to look down from heaven and see it displayed so nicely. 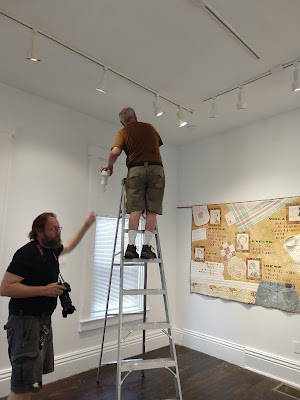 Posted by Kathleen Loomis at 11:59 AM