Yesterday's New York Times had a review of an art quilt show at the American Folk Art Museum in New York.  Quilts aren't often invited to the Times art section, so I probably should have been happy to read this.  But instead the whole story just pissed me off.  Maybe I'm just feeling crabby today; if I'm all wrong please let me know.

Let's start with the lead.  "After a year of shows that combined folk and self-taught artists (a.k.a. "outsiders") with M.F.A.-groomed "insiders," the reviewer wrote....

What do you expect to read at the end of that sentence?  Something to the effect that it's hard to tell the difference between insiders and outsiders?  That the M.F.A. isn't all it's cracked up to be?  Well, let's read on...

Tell me what that has to do with the beginning of the sentence?  I read it as an offhand slur, that quilts are by definition "outsider" art (else why stage it up with the reference to outsiders?).  To back up her point, the reviewer recalls that an excellent show last summer put quilts by Rosie Lee Tompkins in the same gallery as works by Donald Judd and other mainstream artists.  (The late Rosie Lee Tompkins, you may recall, was an African-American quiltmaker in the Gees Bend tradition, "discovered" and sponsored by a rich white guy, who "left awestruck critics scrambling to describe" her work, in the words of one obituary.)

The reviewer says the current show "is reinforcing that point" (which point, I'm not sure).  I guess that means she likes it.  Even though the artists in this show aren't outsiders at all but "have found their way into quilt making from other mediums and disciplines."  (So why the big buildup about outsiders?)

Two of the artists, Stephen Sollins and Sabrina Gschwandtner,  have a common gimmick: they construct works that look like traditional quilts, except made from nontraditional materials.  The museum even hung some of the traditional quilts next to the new ones, to make sure we get the point. 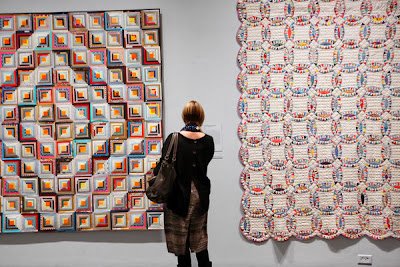 Sollins makes his "quilts" out of mailing envelopes, both paper and tyvek.  Some of them are faithful replicas of antique quilts in the museum's permanent collection.  He explains that mailing envelopes and quilts are both "the remains of outmoded technologies."

Gschwandtner makes hers out of 16mm film that she scored when the Fashion Institute of Technology got rid of its library of documentaries on textile crafts (I hope they transferred the content to digital before they dumped the originals).  She too finds metaphorical connections between the material and the process: the cutting and splicing of film echoes the cutting and piecing of fabric, while the subjects of the films have to do with fabrics and textile making.

So without having seen the exhibit in person, but spending a lot of time on the artists' websites, I am pleased but underwhelmed.  Replicating traditional patterns in materials other than fabric is hardly a new concept in the quilt world.  It's been done in every Quilt National in the last 20 years, I suspect. Making patchwork out of paper is the no-brainer in this genre, so no points for originality to Mr. Sollins.  Arturo Alonzo Sandoval has been making quilts out of film for decades, so not many points to Ms. Gschwandtner either.

But hey, it's new to the New York art world.

More next week about the third artist in the show.