From Conceptual Art, by Tony Godfrey:

Art & Language, one of the most important collaborative groups of artists in the late 1960s, characterized Conceptual art as Modernism's nervous breakdown.  A nervous breakdown happens when we can no longer believe in all we have based our lives on: friends, family, job, beliefs.  Conceptual artists could no longer believe in what art, or Modernist art, claimed to be, nor in the social institution it had become.  Modernism as it developed from the mid-nineteenth century had sought to represent the new world of industrialization and mass media in new and more appropriate forms and styles.  But by the 1960s the dominant strand of Modernism had become Formalism where attention was focused solely on these forms and styles.  Progress in Formalism had nothing to do with explaining life in a rapidly changing world but everything to do with refining and purifying the medium as an end in itself.  Conceptual art was a violent reaction against such Modernist notions of progress in the arts and against the art object's status as a special kind of commodity.  The purely retinal or visual nature of art, especially painting, was extolled by theorists and promoters of Modernism.  This was anathema to Conceptual artists who emphasized instead the crucial role of language in all visual experience and understanding.  Modernist art had become a refined and hermetic discourse.  Conceptual art opened it up to philosophy, linguistics, the social sciences and popular culture.

from one of the pioneers of Conceptual Art: 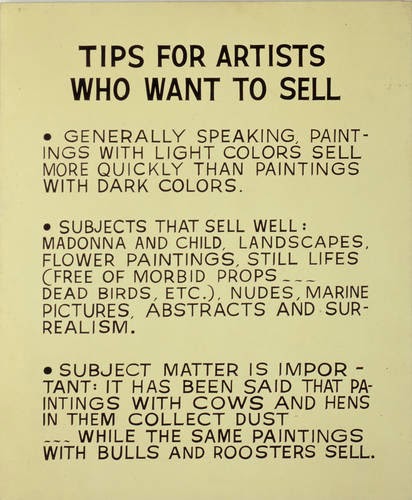 
Posted by Kathleen Loomis at 6:44 AM