This month's show at the Patio Gallery in Louisville features work by Wendy Weiss, a fiber artist who specializes in natural dyeing and ikat weaving.  She has twice had Fulbright fellowships to visit India, learn traditional ikat techniques and work with the local artisans to develop new marketable designs.

She gave a gallery talk at the opening reception last week and I am left with new awe for the traditional artisans who mastered this complex method of weaving.  In ikat, the design for the cloth is dyed separately into the warp and weft threads, then they are put together on the loom and if you're very good at it, the chosen pattern will emerge perfectly.

If you have thought of ikat as "painted warp," you are seeing only the tip of the iceberg, and as Weiss said in her talk, "I've always thought of that as cheating."  True ikat starts long before you get near a loom.  The threads are stretched onto an armature and then tied in small groups -- in some traditions, as few as four threads at a time -- following a graph paper design.  In her own work, Weiss has emulated the method in which the threads are doubled over in the center, with top and bottom parts of the warp tied together to create a mirror image when it's unfolded and woven. 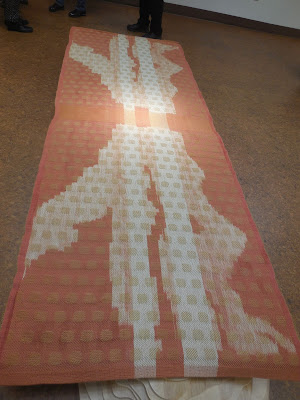 Weiss also explained how to tell whether an ikat is single or double -- that is, whether it's patterned on both warp and weft, or just one.  Look at the places where colors abut.  In the checkerboard piece below, just the warp (horizontal in this photo) is patterned.  Thus you get ghost lines crossing the warp where the black and white warp patterns don't align perfectly, but sharp lines where the weft threads have no pattern to worry about. 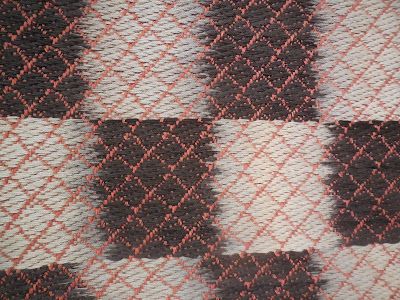 Weiss has been experimenting with text as her ikat design.  Here's a detail of her piece titled "Resist," an appropriate double entendre for a dyer. 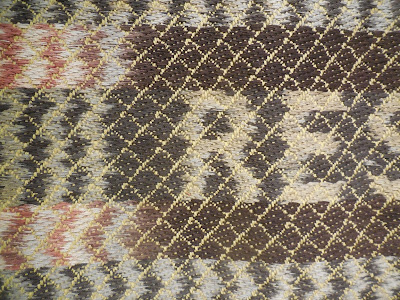 She has a huge wall-sized text piece in the prestigious 2016 Lodz Tapestry Triennale, which opens in May.  The actual tapestry has been shipped to Poland already, but a photo by Weiss's husband Jay Kreiner is in the exhibit. 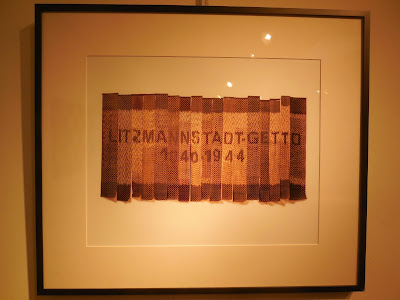 It's based on one of Kreiner's photos of the commemorative sign at the site of the Lodz ghetto, taken on an earlier visit.  Each of the letters is woven into its own panel.

The show continues through March 29.