I wrote last week about opening up the top section of my Bernina with what I flippantly called a "fancy screwdriver" and various commentators corrected to "Torx screwdriver," "hex key" or "Allen wrench."  I was moved to do some research and in case you're a hardware nut, here's the scoop.

The Allen socket aka hex socket was patented in 1910 but it is just one of many, many, many variants in screw/screwdriver shape that are designed to improve torque, reduce damage to the screw by reducing slippage, and allow access in tight spaces.  Courtesy of Wikipedia, here are a bunch of other designs: 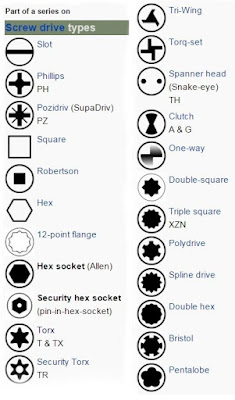 The closest thing on this chart to the Bernina screw is the Torx, but maybe just a tad off.  The cross-section of the Bernina wrench is a perfect Star of David, with the lines between every other point drawn ruler-straight instead of dipping down a bit as in the Torx diagram.  Maybe it's some fancy European screw that didn't make it onto the Wikipedia schematic.

I guess I don't really care.  But don't run out and buy an Allen wrench if you want to open up your Bernina.