Working in series 1 -- the questions!


I was pleased to have had the opportunity to give a presentation at the SAQA conference in Philadelphia last week, on the subject of working in a series.  I asked three other well-known series wonks -- Judy Kirpich, Kathleen Probst and Maria Shell -- to let me show some of their series works, along with my own, and the four of us addressed questions like why do we work in series and how do we think our way from one piece to the next.

Afterwards several people noted that all four of us do abstract work, and wondered whether it was possible for representational artists to work in series too.  My first response, when the question was posed from the floor, was that I didn't see why not -- the concept of evaluating the work you just finished, then proceeding another step down whatever road you were taking, seems to be just as valid no matter what kind of images you're making.

But as several other people brought up the same question as we sat together at dinner or stood in line at the ladies room, I had to admit that representational artists who work in series didn't come as easily to mind as abstract artists.  And I have been giving a lot of thought to why that might be true.

Of course, it could be that I, as an abstract artist, just pay more attention to others who work in the same genre.  It's true that I am not usually a lover of the more realistic end of the representational spectrum, at least not when executed in fabric (I don't think the medium is well matched to the subject matter).  But I do follow and admire many people who work at the more abstract end of that spectrum.

And when I visited the Art Quilt Elements show at the Wayne Art Center on Saturday, I saw several pieces that reminded me of what hadn't come immediately to mind.  The first was the best in show winner, Diane Siebels, whose work I have seen and liked several times in the past. 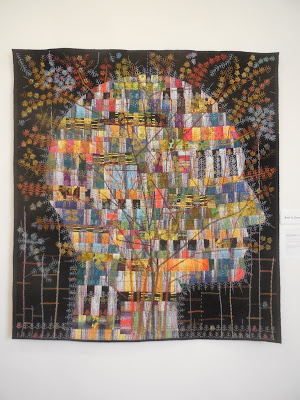 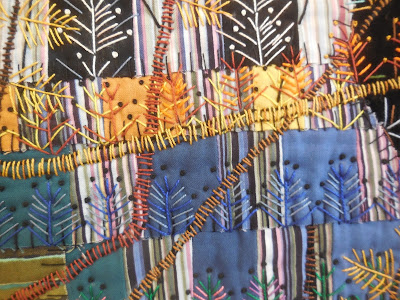 It's obvious from the title that she works in a series.  Here's an earlier piece that is in Quilt National '15: 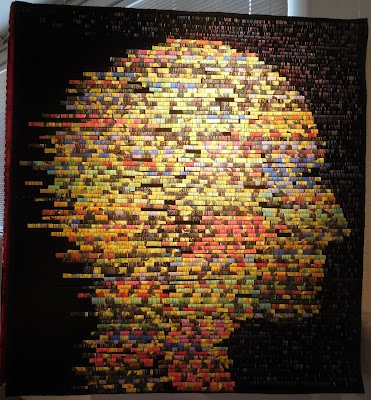 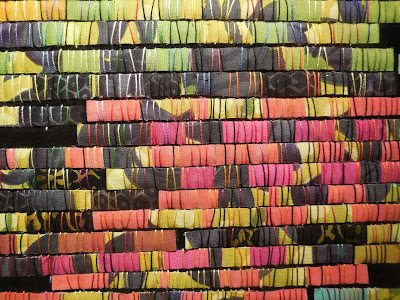 Just a quick look reveals what has happened in the series between those two pieces.  The background has become more complex, with floral patterning, and there's lots more hand stitching, decorative as well as functional.  Clearly you can stick with the same basic image or theme and experiment with variations in technique as you progress in a series.

I'll show you some more examples of representational series in later posts.