My second sketchbook for the daily art project had brown paper, and I quickly learned that pencil didn't show up very well.  So I started using either a Sharpie or a fat Micron pen.  During a boring meeting in early April I found myself doodling buildings or blocks with distorted perspective and slots or holes cut into the sides.  After a while I realized that I should be working in my sketchbook instead of on the edge of my agenda. 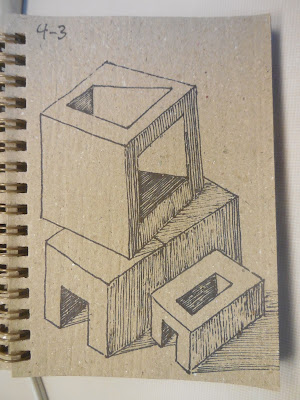 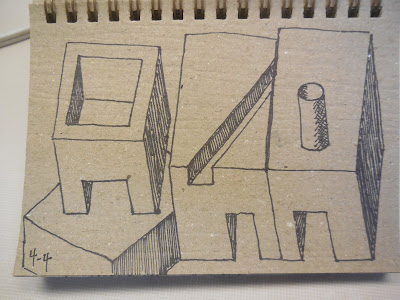 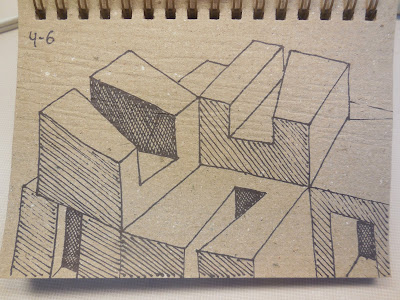 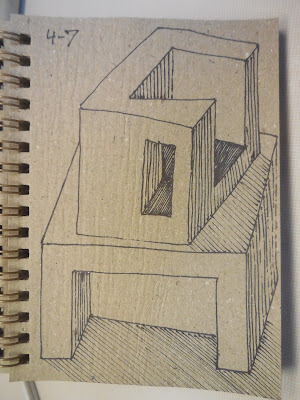 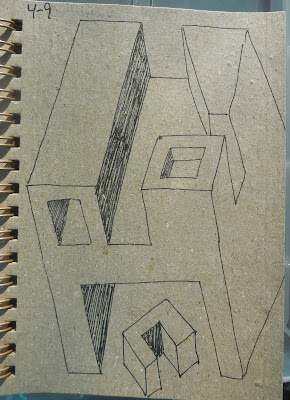 I drew buildings for a couple of weeks, realizing that I liked going back to the same concept over and over.  Each day's drawing seemed to come naturally from the previous day's; I tweaked the concept, experimented with different methods and densities of shading, came up with new ways to draw holes and slots in the buildings, tried different vantage points.  Some days the perspective was very distorted, other days it was more realistic.

I got the same familiar buzz out of working in series that I have always felt when my quilts are in a groove. And most important, I felt for the first time that I was working from my own imagination, finding my own voice and refining my style by drawing the same subjects over and over.

Then I ran out of pages in my brown-paper sketchbook and stopped doing doodle buildings.  With a new white sketchbook I thought it would be exhilarating to go back to pencil and try something different.  But I floundered.

Update: linking this post to Nina-Marie's blog -- check it out to see what other fiber artists have been up to this week.