I'm a huge believer in serendipity, aka never cleaning up your studio too much.  So many times I have found a piece of fabric or a button or a paper or a piece of rusty metal lying around and a few minutes later realize that it's just what I need for a piece of art in progress.

The latest recurrence came about as I was sitting at my worktable cleaning up, and what appeared from under a pile of stuff but an empty slide mount.  I do have a box full of slide mounts that it could have been filed into, but that would have required me to get up, find the box, open it up, put it back.  Seemed like an awful lot of work for just one little piece of plastic -- simpler to just use it!  And anyway, I needed a break from all that cleaning up.

So I took some thread that was also sitting on the worktable and warped up a little loom.  What to put on it -- beads? thread of a different weight or color?  Plenty of stuff was within reach.

Including a leftover bit of map from a collage.  I cut it into narrow strips and used that as the weft.  The weaving was fiddly because of course I didn't have heddles or any other mechanism to make a shed, so each thread had to be pulled up with tweezers for each strip of map.  But it was a nice zen hour, lost in the process (which after all, is why we've all become sewists and textile artists, isn't it?). 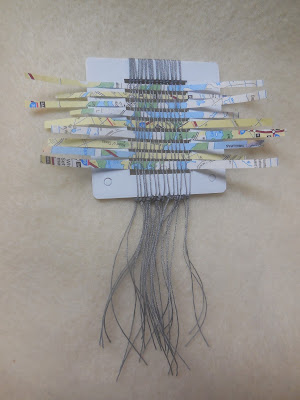 I'm making this my daily map.