I am going to have a solo show in November focusing on my many daily art projects over the last two decades, and I'm getting serious about what pieces to exhibit and how to display them.  I decided that the best way to show four years worth of collage work on index cards would be to choose maybe 20 of the cards and pin them to a foam core board, and put the file boxes with the rest of the cards on a table where visitors could leaf through them at leisure.

So I needed some big foam core boards.

After not finding them at my local office supply store, I went online and discovered that Office Depot had a pack of ten for sale.  Great!  But they were not available for instore purchase.  Instead, they would deliver them to my house tomorrow for free.  Seemed like a great deal, so I bought them. 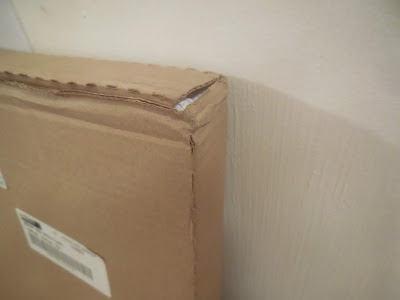 But when the boards came the next day, it was bad news.  They were loosely packed in a cardboard carton with no internal packaging.  No flaps to protect the corners.  And guess what -- every single corner of every single board was busted in. 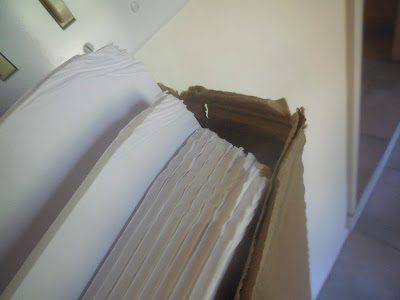 I filed a complaint and got a speedy reply telling me that they would of course refund my money, and would be happy to put in a replacement shipment, and the beat-up boards would be picked up Tuesday between 8:30 and 5 pm.

Tuesday came and went, but nobody showed up to pick up the boards.  I called.  She looked up the order -- and there was no pickup scheduled.  I should dispose of the boards myself, and did I want her to put the replacement shipment in.

So now I own ten FREE foam core boards with busted-in corners, but none that are pristine enough to be put in a gallery.  One friend suggested that our local art store might be able to cut the corners off neatly.  (Because if you've ever tried to cut foam core, you know that home tools just give you a big mess.)  I will pursue that.  But if they can't, I guess I will have a search for some place in town other than Office Depot that can sell me big foam core boards.

I'm glad I have started on this show planning with plenty of lead time.