The freezer repairman came out first thing Monday morning, took some pictures with his cellphone (of what??) to "document" that the freezer is not working, and went away to order parts.  Later that afternoon they called to tell us the parts are on back order.  In other words, heaven knows when if ever they will come.  We went through the kitchen freezer to consolidate and pack tighter, and got a beautiful blackberry cake out of some of the stuff jettisoned. 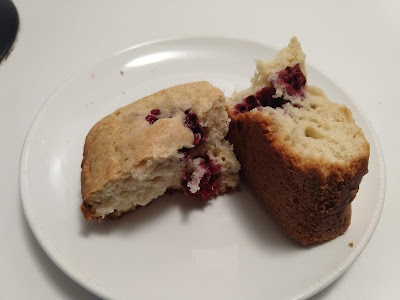 Gave away some meat to the children, thawed out a bunch of things for future use (good news: when you start at -30 it takes a long time before you really have to cook it).  Unplugged the new freezer.

When I reported this last week, Carol left a comment: "I would be calling the manager of the place you bought it and ask for a new unit.  Something is wrong in the mechanics of this one and it will probably stalk you all the live long days.  After two service calls the issue is beyond the serviceman.  Get tough."  Good advice, Carol, and I did call Home Depot.  The guy said to call the repair place Monday morning and see if they know when the parts will come, and if it's too far out, we can order you a new freezer.  Can you even get a new freezer?  I asked him.  Well, that's a good question, he said.

I have developed a new obsessive behavior, checking the Johns Hopkins coronavirus site once a day.  They keep a running total of cases around the world, updating the site every couple of hours, apparently.  My daily ritual is now to take a screenshot of today's map, then call up yesterday's screenshot to compare the two tables.


Some will think this macabre, but we all need our rituals, and often it helps to stare the danger in the face for a bit as an antidote to pulling the covers over your head.  It's here in the US with a bang -- on Thursday we topped China for the most confirmed cases in the world, and since we do so little testing, we probably have way more cases than the "confirmed" numbers show.  If nothing else, confronting the stark reality makes you more diligent about staying home and washing your hands.

If you have been worrying about virus on your groceries, you might want to watch this video, made by a doctor.  Although I wasn't really worrying until after I watched it...


We've been having beautiful weather here, unseasonably warm and sunny.  The trees are flowering everywhere; the breezes smell of new growth and spring.  People are out in the parks having a great time, walking in the neighborhood, not staying far enough away from each other.  They had to take down the basketball backboards from our parks because so many guys were out playing pickup, ramming into one another, breathing heavily and all touching the ball.  Would it be better for us all if it were cold and rainy and the call of the outdoors were not so loud?

Posted by Kathleen Loomis at 12:48 PM