Having whipped out a baby quilt for Vivian last week, I realized that I probably ought to make one for Isaac too.  We met Isaac when he was three, and have considered him our grandchild for a long time, but I never got around to making him a baby quilt -- and now he's nine and a half!  Yet there is no statute of limitations on a baby quilt in my book.

The first step was to survey my stash and see what kind of fabric was available.  A couple of years ago I went on a divestiture spree and gave away several cubic yards of commercial print fabrics that I thought I would never use.  But rooting around in drawers and boxes turned up a pile of woven plaids and I got the idea to replicate a quilt made some time ago for my rail fence book. 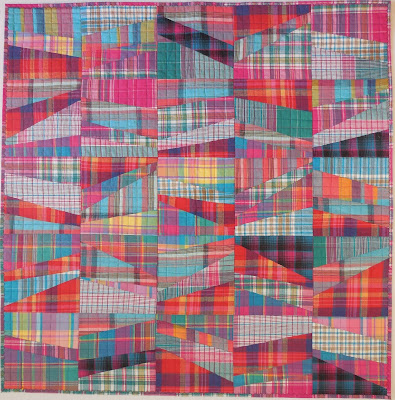 But this time, since it's meant for a boy, I dispensed with almost all the pinks and ended up with a much darker palette (even though it looks pretty bright in the photo).  Here it is on the design wall, waiting for the blocks to be sewed together. 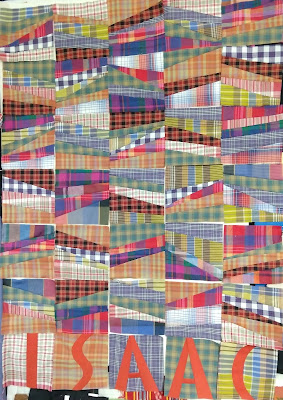 This pattern of up-and-down diagonals, which I think of as mountains, is an old favorite.  I first used this approach in a workshop with Margaret Miller in 1996 when she was developing a "recipe" for quilt blocks that she subsequently called "Easy Pieces."  Workshop participants were invited to send photos of quilts made with this approach, and mine was selected to be professionally photographed and put in her book.  I realize that I don't have a good image of the quilt, so here's a scan from the book. 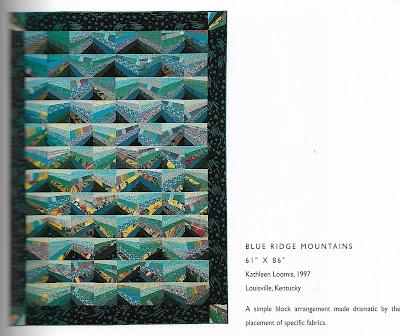 I loved this approach, and made several quilts with it, but Margaret's construction method left lots and lots of fabric on the cutting room floor, as you can tell from this diagram from the book:

So when I revisited it many years later, I came up with a method of making blocks with random diagonals that left absolutely no waste.  That's the method I used for the pink quilt at the top of the post, and for Isaac's quilt.

In case you're in the mood for some easy sewing that looks really complicated, I'll give you a quick tutorial on this diagonal rail fence block in the next post.