After I wrote in April about making masks for friends, family and supporters of PYRO Gallery, my sister-in-law in Australia asked whether I could make some for them.  I said of course, whipped out four beautiful masks, packed them up and took them to the post office.

I regularly send stuff to two foreign countries: Australia and Germany.  I've dabbled in other carriers but my go-to is the post office.  I love the post office; I love the stamps, and the ubiquity of the service, and the daily delivery; I love getting and sending real mail to and from real people.  I've read the history and learned how the post office, serving all the 13 colonies, was the major institution to hold the disparate settlements together before independence.  For many years I sent a postcard to my mother every day and found joy and comfort in the ritual of the mail.  I am appalled at the president's attempts to cripple or kill the post office.  So I'm a big fan.  Hold that thought as I tell you the rest of the story.

Time passed and I realized, weeks later, that I hadn't received a thank-you note for the masks.  I found the receipt somewhere in the pile of stuff on my desk, and checked the tracking number.  Here's what I learned:

Now, I like Chicago as much as anybody, and I would personally be happy traipsing around the place for a month, returning periodically to my base of operations to change clothes and regroup, but I didn't think that mail did that sort of thing.  Guess I was wrong.

After its month in Chicago, the package set off for the Southern Hemisphere.  By boat?  By carrier pigeon?  It arrived on June 20.  Must not have been by boat, because when we took a cargo ship across the Pacific it took 14 days from Los Angeles to New Zealand, and this was only 11 days.  So probably an airplane, albeit a mighty slow one.  And then it took another 11 days to get to my brother's house 100 miles west of Sydney.  No details on whether its week in Sydney was like its month in Chicago.

The tracker recorded that on July 1, "Addressee not available -- scheduled for another delivery attempt today."  Which apparently never occurred, nor did the carrier leave a note in the box.  After I checked the tracker again my brother went to their local post office and collected the masks on July 8. 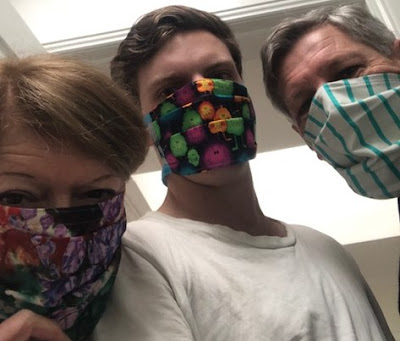 When I looked at the USPS website just now, I found pages of alerts from dozens and dozens of countries warning of delays and suspensions in mail delivery.  Australia's, for instance, said "Customers should expect delivery delays."  No kidding.  If you're planning to send anything overseas you might want to send an e-card instead.

During May and June I was feeling like a chump -- why had I even bothered to make and send masks to a country that had pretty much whipped coronavirus before my package got there.  But guess what, this month they're having a resurgence.  The state of Victoria, where my nephew attends university, is in heightened quarantine.  My nephew, deciding to come home for a while, managed to get on a plane hours before Victoria closed its borders.  And a few days ago a new outbreak in New South Wales, where my family lives, has everyone on alert.  So maybe the masks will come in handy after all.