A message from Alison 2

I wrote earlier this week about exchanging messages with Alison Schwabe, a longtime internal pal who lives in Uruguay and commented about my Memorial Day quilt that consists of 4000+ tiny American flags.

And once she got on the subject of flags, Alison wrote some other things worth sharing.

"Lately with all the USA election commentary on our cable channels here, CNN and BBCWorld, the stars and stripes of your flag have been the core of all the graphics, obviously, and I'm no stranger to US elections coverage, but this season it's been striking to me that any combination, any arrangement, of star+stripe+red+blue+white is a visual shorthand for a statement of your country.  I don't mean depictions of the flag itself, everyone has things from tea towels to clothing patches, coffee mugs etc etc with our national flag on.  I mean the elements which combine to make up the flag design.  You see it in fabrics and clothing, sunglasses, household objects, all kinds of things in addition to the bunting and stuff that's rolled out for electioneering events at all levels.  Even the round carpet in wherever it was Biden was speaking from last Wednesday night was red and blue with central white star!  I'm not aware that any other country's national flag has spread out so much from its actual flag format."

I am a flag junkie and have used flags a lot in my art, as well as taking photos of them any time I can.  So Alison's comments made me think about the ubiquity of the flag's elements.  Even the nicknames of our flag -- The Stars and Stripes, The Red, White and Blue -- demonstrate by metonymy and synecdoche how the elements instantly conjure not only the whole flag but the nation itself, a linguistic shorthand as well as a visual one.

I've begun a series of quilts called "Stars and Stripes" in which I'm exploring how you can use those two shapes and how much you have to change them around before it no longer reads as a flag.

I'm planning to make six quilts in the series.  Here's number one, obviously a flag: 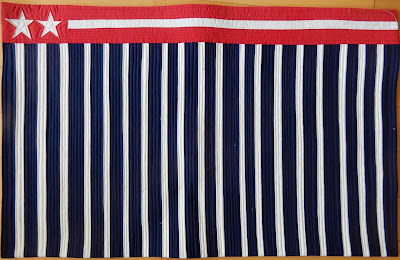 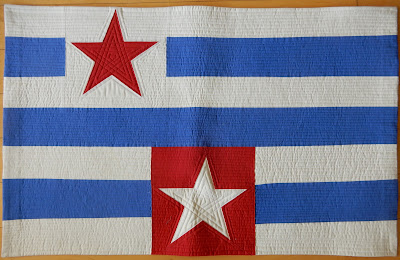 I think this next one is going to be number four, and if you don't see it hanging from a flagpole, you probably wouldn't read this as a flag, thanks to unflaglike grays: 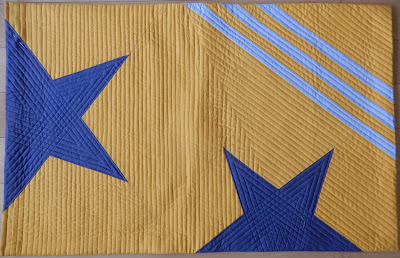 Alison mentions the use of flag elements in household stuff.  She's right -- add the colors to some sort of star and stripe, and you're totally "patriotic," as witness this stuff I found in a Walmart some years ago near Fourth of July, never mind that it was all made in China. 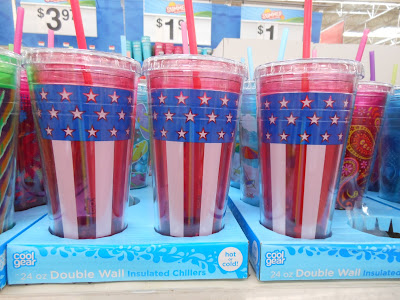 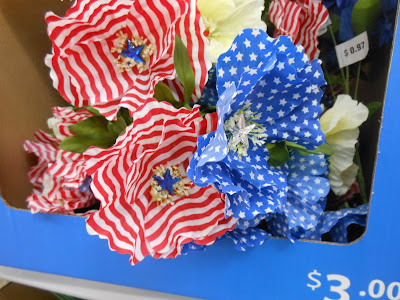 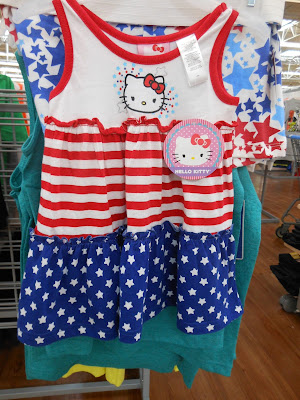 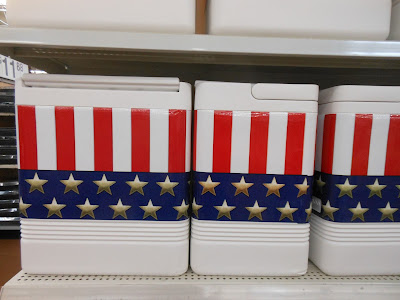