Thanks for asking Dana, and here it is.

And an update:  last week I was unhappy to discover that my account had been cloned (I'm told that's the accurate term) by somebody who stole my profile, my picture, my first week of posts, my followers, and whisked them over to a new account named exactly the same as mine but with a numeral 1 at the end.  I tried to report this to the instagram automated system and at first was told that nothing about the post violated "community standards" so never mind.

It was particularly galling when my fake picture (I could tell because the evildoers put a wide black ring around my real picture) would show up in first place on my "suggested for you" list of accounts!  And it was identified only by my (correct) name, so who besides me would know that they were being suggested to follow a fake?

I kept checking every day, calling up the fake account and reporting the user for pretending to be somebody they weren't.  Never got another response from the automated system, so I figured I was still being ignored.  But finally when I checked earlier this week, the fake account doesn't seem to be there any more.  I cannot explain it, but I'm happy.

Today's instagram post shows three collages from 2013, all using little angels that I cut from a book of copyright-free images.  I pasted them onto scenes of assorted calamity and destruction, and gave them speech balloons.  Obviously we can't tell exactly what they're saying, but in my mind they are really pissed off at what they're seeing. 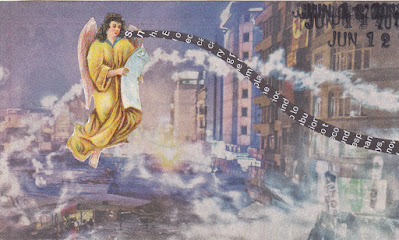 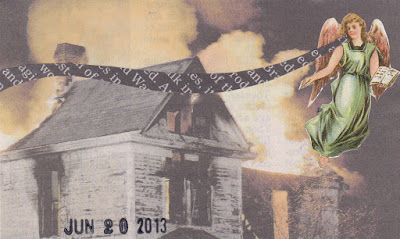 Posted by Kathleen Loomis at 4:40 PM