Today is my father's 108th birthday, although he did not live to blow out the candles.  He died in 2007 but every year on his birthday I like to do a little something to remember him.  Nine years ago I wrote this blog post, which if you even read it to begin with have probably forgotten, so I won't feel guilty reprinting it now.

Since this blog is mainly about art, I'll take this opportunity to reminisce a bit about how my father taught me about art.  Although he and my mother were both only one generation from pretty damn poor and uneducated, out of the blue they both developed a love of art that was quite unexpected in the dark days of the depression.  Dad began to acquire art as a very young man and was quite proud of his growing collection.  Indeed, buying art was one of the most important activities of his life, a passion he instilled in his children as well. 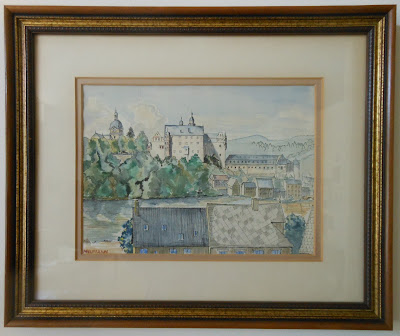 Among his World War II souvenirs was this lovely watercolor of Weilburg, Germany, which he purchased from an impoverished German artist he ran into on his military rounds.  The purchase price, modest though it was for Dad, allowed the artist and his family to buy food for several weeks. 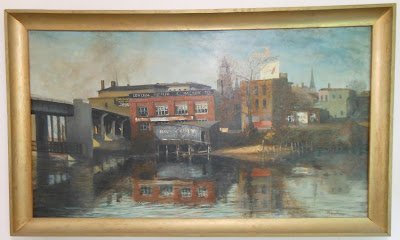 Shortly after the war, Dad was asked to judge an art contest for his local museum.  His honorarium consisted of the second-place winner, this gorgeous picture of Saginaw, Michigan, with the Saginaw River in the foreground.  The steeple at the right was the church where my parents were married and my sister and I were baptized.

When I was about 10, Dad took me on a Christmas shopping mission -- we went to an art fair and bought a painting that was supposed to be a secret gift for my mother.  It showed up under the tree with an envelope reading "A surprise for Vi!"  But when she opened the card, it said "The surprise is that this painting is for Kathy!"  It was the first piece of art that was mine alone, and the first of dozens, if not hundreds, that Dad gave to me.

All three of these paintings now hang in my home and whenever I see them -- wherever I turn -- I am reminded of how my father opened my eyes and my world to art.  A favorite family activity was to hit an art fair (the Cheap Art Fair was the best of all) and buy a bunch of new stuff.  We shopped at the low end of the food chain but managed to find plenty of lovely things.  The occasional dud didn't cause all that much financial regret, and probably made some artist quite happy.

After my parents died, my sibs and I divvied up the artwork, a process that began long before our parents' demise, has taken years to accomplish and still isn't complete.  I'm now trying to pass some of the art along to succeeding generations, continuing Dad's legacy, passing down both the tangible and the ineffable.
So Happy Birthday, Dad!  You're here in every room of the house, living on in the art.
Posted by Kathleen Loomis at 5:52 AM