I have never been one for working on just one project at a time.  Some of my art friends find focus by finishing up one thing before starting on the next, but that's way too controlled for me.  I like to have several things going at once, picking up whichever one is closest to hand without walking up or down the stairs, whichever one is most conducive to stitching while talking with family and friends, whichever one fits my mood of the moment.

I've posted several times about my coronavirus memorials, marking each death in Kentucky with a french knot onto a roll of vintage bandage gauze.  I finished the 2020 memorial a few weeks ago (2,662 dead) and almost immediately started on a 2021 version (7,575 dead and counting as of this week).  I've finished January (1,083 dead) and am almost done with February (892 dead).  But the small scale of the knots got to be tiring, and I yearned for something bigger, faster, and involving the sewing machine.

So for the last few days I have been working on a new project, a memorial for the U.S. military dead in Afghanistan.  Longtime readers and pals will know that I did a similar piece in 2008 counting the U.S. military dead in Iraq, which traveled extensively with Quilt National '09 and is now owned by the International Quilt Museum in Lincoln NE.  It had a flag for each death, referencing the flag-covered coffins that came home from that war.

This one will be similar in format -- a single little quilted rectangle for each of the dead, held together with stitching in space -- but different in materials and concept.  The brother of one of my dear friends and art pals was a career Navy man, serving as Chief Surgeon for the group of ships supporting the Theodore Roosevelt in the Persian Gulf during the Iraq war, and then on the ground in Afghanistan at the hospital in Kandahar.  After he retired a few years ago, he decided to divest his old uniforms, and through his sister, they came to me for purposes of art.

At first I wasn't sure what to do with them but with the impending end of our Afghanistan adventure I thought that war needed a memorial as well for the troops who served and died.  Cutting up the camouflage uniforms will give me the fronts of the small quiltlets for this memorial; the backs will be made from a large variety of fabrics, to remind us that every one of those uniformed dead was an individual, a person with hopes and dreams too soon cut off. 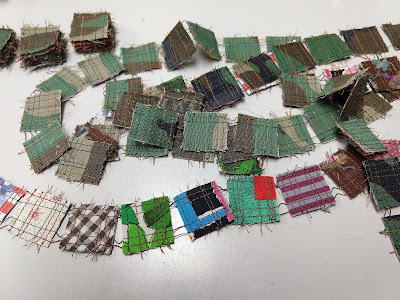 The death count is suprisingly inexact, (perhaps because so many of our military and support activities were outsourced to contractors and it's hard to tell who's military and who isn't)  and there will probably be a few more in the coming days and weeks as we attempt to make a final exit, but it's somewhere in the vicinity of 2,400.  A lot fewer than in Iraq (4,431 dead since 2003; there were 4.083 when I made my Memorial Day quilt in 2008).

This compulsion to count the dead probably sounds morbid and obsessive.  I don't think I'm particularly preoccupied with death, certainly not in my daily life, where I have been blessed not to be closely touched by the coronavirus or the war, and where I've lost only one close family member in the last decade.  But the historian and journalist in me always wants to find out the facts and write them down, and the soldier's daughter in me always wants to remember how war is not glory, it's hell.

I'll write more about this project soon, because working with the uniforms has proven to be quite a surprise.

Posted by Kathleen Loomis at 1:25 PM