Earlier this year I did a project of memorializing each of the 2,662 people in Kentucky who died of coronavirus in 2020. I stitched 2,662 french knots onto a roll of vintage gauze bandage, distributed by month, starting in March with only 15 deaths and ending with 754 in December. 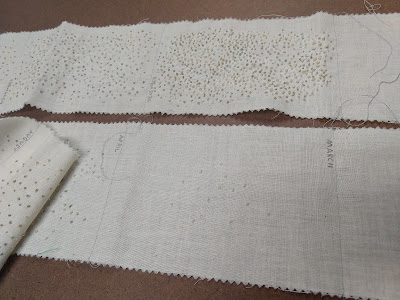 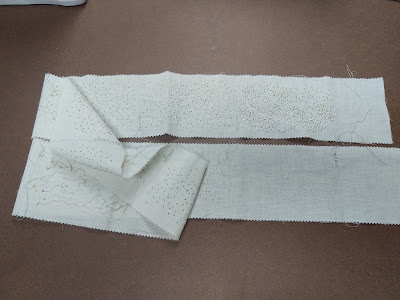 I finished the project about two weeks ago and had already decided that I needed to continue into this year, since the virus has done the same.

I learned some things from my 2020 memorial.  First is to be more careful in counting!  In the first project I tended to get carried away, stitching while watching TV without really noticing how many knots I had made.  I ended up having to cut out dozens of knots where I overshot the mark -- and that hurt.  Fortunately the gauze was forgiving, and I was able to erase the needle holes with a scratch of fingernail or needle end.  But it was stupid to do it that way. 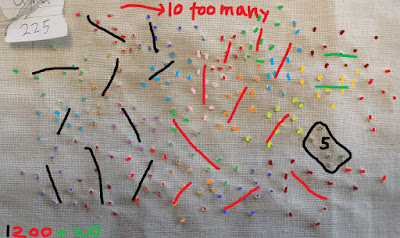 This time I'm going to plan ahead a bit and gauge the relative density of the knots in a given month by comparing to the 2020 piece.  For instance, January 2021, which I'm working on right now, has to have a third more knots in the same space as December 2020. 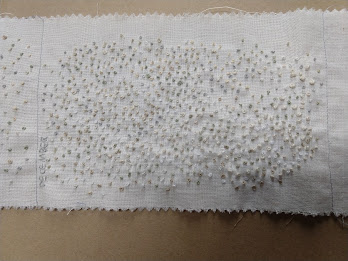 This is a meditative project.  When I posted a shot of the new stitching on instagram earlier this week, a friend left a comment: "I imagine you have a very profound realization of exactly how many deaths the "number" represents.  So easy to see a number and move on."

I replied: "You're right -- that's exactly what I think about when making these marker pieces.  I guess this is the sixth death marker that I have embarked upon (one is half done) and this genre, if you want to call it that, has great meaning for me." 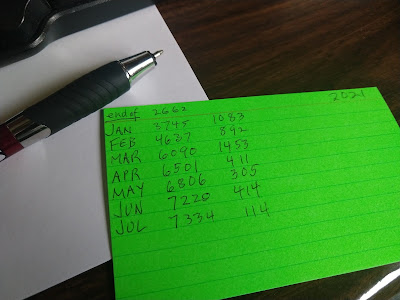 Meanwhile, if more people would just get the damn vaccine, there would be a lot fewer knots in my future.
Posted by Kathleen Loomis at 10:42 AM