Memories of a dear friend

I've had a deep loss this month with the sudden death of my friend and art pal Marti Plager.  Not only was she my oldest continuous constantly-in-touch friend -- dating back about 25 years -- she opened the door for my development as an artist/quilter.  If you've ever done workshops at the Crow Barn or Arrowmont, or attended Quilt National or Paducah or Houston or Form, Not Function, or gone to a regional or national SAQA or SDA meeting, there's a good chance you met Marti somewhere along the way, because she was not one to let any person in the same room with her go unmet. 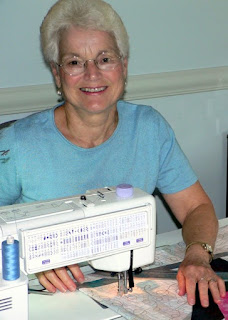 One of Marti's proudest moments was being juried into Quilt National in 2011.  Her whole-cloth quilt was dyed with flour resist, a technique she used brilliantly and taught in several local workshops. 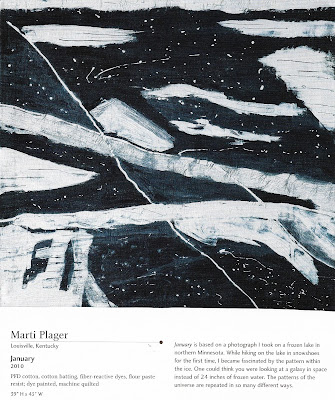 Another of her great accomplishments was helping to start the juried show Form, Not Function at the Carnegie Center in New Albany IN.  When a tiny group of local fiber artists had a show at the Carnegie in 2003, the museum was surprised and delighted that so many people came in (even if many of them mistakenly expect to see traditional quilts),  Marti and I, along with the others in that show, suggested that the museum should put on a juried show and do art quilts every year.
The first FNF, in 2004, was limited to artists in Indiana and its surrounding states, but quickly expanded to the entire US.  For the first several years, the six members of River City Fiber Artists served as jurors, and we also would hang the shows, back when we were a lot more agile.  Marti was always the one to go up on the ladder.  Today FNF has an excellent national reputation and regularly draws entries from the top tier of quilt artists.
In several workshops with Carol Soderlund in the early 2000s, Marti mastered the art of dyeing, and explored many different techniques.  After good runs with flour resist and screenprinting, she mainly settled on dye-painting.  In later years, after moving to a smaller place with no good wet studio space, she went to her closet and found enough in her stash to make dozens of quilts with intricately pieced bits of her own dyed fabrics, like the one below, in Art Quilt Elements 2016. 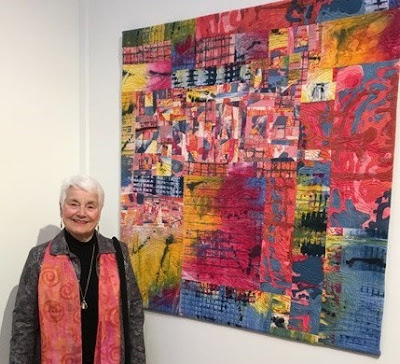 You can see a whole lot more of Marti's work on her website.  I'm going to need at least one more post to tell you about my personal connection and how she changed my artistic life.  Stay tuned!

Posted by Kathleen Loomis at 5:18 PM