There were lots of comments on my two latest posts, and rather than just leave a reply comment of my own, where probably nobody would see it, I'll take this post to reply to everybody. (That's one feature that I like in Instagram: if you comment on a post, and subsequently somebody -- the original author, or another reader -- replies or likes it, the system will tell you, even if your comment was made long ago.)

I wrote about all the reading that I've been doing since lockdown, and how I have come to like e-books better than paper.  Shasta Matova commented:  "There is a time for both, so I don't try to make a choi8ce, but I too like ebooks especially when the library is closed.  Besides the benefits you mentioned, they remember where you left off and give you definitions for words I don't know."

Idaho Beauty wrote:  "There are times when (e-book) is the only way I can get a book through my library but I don't enjoy it nearly like I do holding an actual book and turning the pages by hand rather than by swiping (and I do hate that sound that is sometimes added to mimic the sound of an actual page turning)."

Idaho, I too would go crazy with that kind of sound effect.  I always keep the sound turned off on any kind of device, turn it on only if I want to hear something.  I'm sure there's a way you can adjust the preferences in your ebook to deep-six that feature.  It took me several months before I figured out that I could stop the system from showing me passages that other readers had highlighted!  First off, I don't care what other people choose to read and remember, and second, I was really cheesed at how stupid most of the highlighted passages were.

I also wrote about my newest quilt project, a memorial marker for all the U.S. military dead in Afghanistan since 2001, as well as memorials to those dead from covid.  Robbie commented: "I applaud you for all your effort on these projects!  Hope they can all be displayed and appreciated by so many."  Norma Schlager wrote: "I especially like that you are using uniform material on one side and other fabrics on the back.  Can't wait to see how this one turns out."  Martha Ginn wrote:  "Very appropriately dark, drab and sad -- an apt description of this conflict." 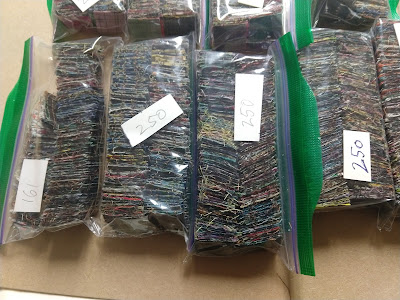 Cindy wrote: "I find your work a lovely tribute to those who are gone.  Not morbid in the least."

Irene MacWilliam wrote:  "I think my mind works somewhat like yours.  I am living in N Ireland and wanted to do a piece in memory of all those who had died in our 'troubles' conflict between 1969-1994... This piece has just been bought by our museum which has a collection to do with The Troubles.  I do a lot of work to do with conflict and how it affects families."   Irene, good for you!  I think that one of the most important jobs for artists is to witness to the stupid and destructive things that people do to one another.

Jenny wrote:  "Lest we forget: Afghan casualties from Western intervention amount to around 240,000 whilst Iraqis account for around 200,000...  a companion quilt perhaps?"  Jenny, you're right, war tends to be far harder on the civilian population who just happen to be standing there in the way than it is on the actual soldiers.  It has always been thus, but with modern weapons the killing power of each soldier is vastly greater than it was in past wars.  I can't imagine how one might go about marking that number of deaths; once you get into five figures the total has outgrown any technique that I might use. 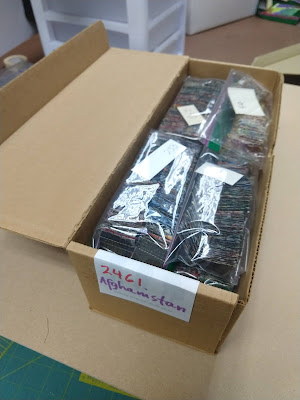 Since I last posted, I've finished all the little bits for the Afghanistan memorial -- 2,461 is the number I'm going with.

Thanks to you all for reading, and for commenting.  It's always good to hear from those at the other end of the cyber-talk!

Posted by Kathleen Loomis at 10:29 AM