My good deed for the future

I learned to sew at my grandmothers' knees, when I was 5 or 6 years old.  Since then I have probably sewed on a thousand buttons and mended hundreds of pairs of pants.  Every time I repeat myself with these mundane but so-satisfying chores I think of all the people who don't have those skills, and wonder who should have taught them.

This summer my son got involved with a new venture, the Louisville Tool Library, a non-profit that owns lots and lots of tools of every sort that Library members can check our for their various maintenance and improvement projects.  At first they were thinking along the lines of shovels, saws, screwdrivers, drills, all kinds of building and fixing equipment.  But then people started donating sewing machines and I perked up my ears.  My son has made himself the guy in charge of workshops, and I volunteered to teach one for total sewing beginners -- today. 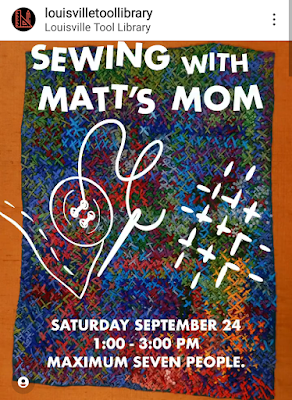 With practicality in mind, I decided to teach how to sew on buttons and how to patch holes in pants, both by hand.  We started with threading a needle (my students did great -- everybody succeeded on the first try) and putting a knot at the end.  Then they sewed on some little four-hole shirt buttons.  They could choose whether to sew plus signs or equal signs through the four holes.

After a couple of shirt buttons, we moved on to pants buttons, which of course required a stalk or shank.  They switched to sturdier needles and button-and-carpet thread.  We spent time on how to tie off the thread at the end of the task, and how to bury the ends between the layers of fabric (one of the students thought this was the cleverest thing she'd ever seen...).

Then we put patches on pants holes -- just plain old holes near the knees, no blown-out seams or holes in difficult places like pockets.  They cut patches from drapery-weight fabric, pinned them underneath the holes, and did rows and rows of running stitches to secure the patches. 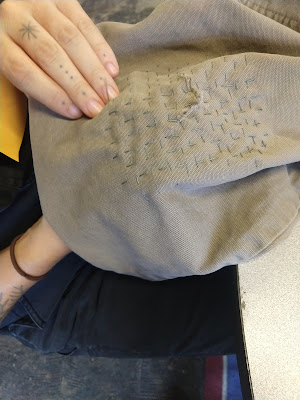 I had only three students this afternoon, after some who had signed up for the workshop were no-shows.  At first I was annoyed, but after we got started I was glad to have so few people -- especially the guy who had never held a needle in his life.  I could give individual instruction, attention and encouragement.  So future workshops will be just as small.

I came home exhilarated -- all three of the students said they wanted to come back for more lessons, and the Tool Library people want to have me come back as often as I can.  I want to keep teaching these basics, and one of the students asked if I could teach "visible mending."  I'd also like to hold a mending clinic in which people could bring in their own garments that need help, and we could talk first about whether the problem can actually be repaired, and how to go about it.  I am less excited about teaching newbies how to use sewing machines but I suppose I could suck it up and do it.  Supposedly the Tool Library people have tested out every tool before putting it out on the floor, so the machines ought to all work (even if they're not Berninas...  I am so spoiled... ).

My objective here is not exactly what I shoot for in teaching quilting or other fiber arts.  In those classes I wish that nobody will ever have to use other people's patterns again.  In these, the bar is much lower: that nobody will ever have to throw out a garment because it has a hole or a blown seam or a missing button.  Call it Survival Skills 101 -- with a side benefit of helping save the planet.  A good day all around!

Posted by Kathleen Loomis at 9:49 PM