Don't you just love it when your quilts come home from a show packed wrong? 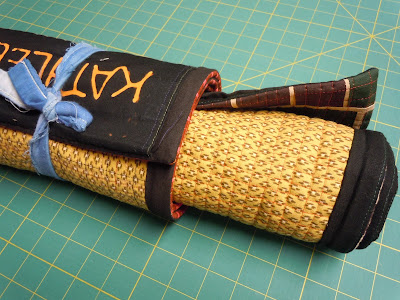 Most quilt and fiber venues know that quilts need to be rolled right side out, so the right side stays as flat as possible while any scrunching wrinkles the back layer.  But museums and galleries that focus on the more mainstream mediums often don't understand how fabric operates.

But this is not an essay of complaint.  The good news is that in practically every circumstance, you can revive your wrongly rolled quilt, just by laying it flat on the bed for a while with some other quilts on top.  If that fails, stretch it out on your clean rug or design wall, give it a good spritzing of water, and let it dry.

I've had some close calls with quilts away from home.  Once I sent off a quilt to a Mancuso show in California, but it never arrived.  I was upset, of course, but persuaded myself that it was a quilt I didn't particularly love.  Three months later, it resurfaced!  The show had been held at a hotel, and the quilt had somehow turned up in the back of a closet long after the Mancusos had departed.  We could never figure out exactly when or how it got there.

Curiously, some years later that same quilt had another show mishap, and again, I could never figure out exactly when or how it occurred.  I was getting ready to ship it off somewhere and when I hauled it out from the bottom of the pile on my guest bed, realized to my dismay that it had horrible stains on both front and back. 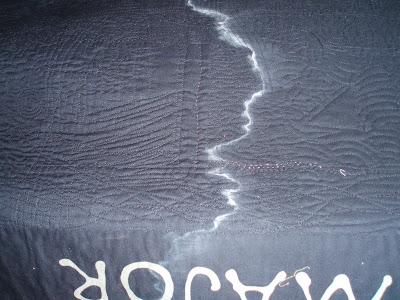 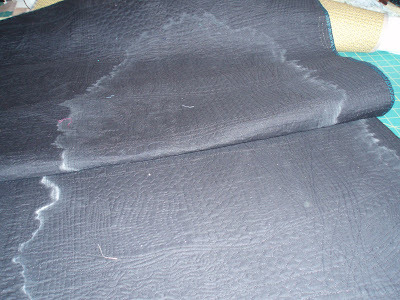 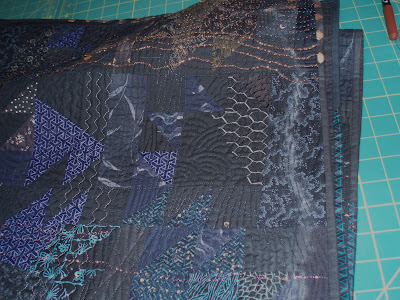 None of the other quilts on the bed had any problems, so I tried to think of where the quilt had been.  Realized that it had last been hanging in a show at a local university gallery, and surmised that a sprinkler head might have leaked over the quilt, as the stains seemed to spread downward.

I never have gone back to see whether there is in fact any plumbing in that corner of the gallery (and haven't done business with that gallery again...).  Because the stains were less prominent on the front of the quilt, and I had taken it down in a hurry, it's conceivable that I had not noticed the stains.  But maybe the stains migrated to the surface later as the quilt aged??   I'll never know.

So what to do?  The quilt had to be on its way the next day.  I figured there was nothing to lose, and put it in the washing machine.  The stains disappeared.  I backed the cars out of the garage, laid a sheet on the floor, spread the quilt on the sheet as tautly as possible, covered it with another sheet and set some fans to blow over it.  By the next afternoon it was dry, flat, and ready to go out in public again.

This quilt has clearly gone through several of its allotted lives.  I realize that all I have are slides, which I have not converted into digital images, so I can't show you a picture.  But it's one extremely lucky quilt.