My good old Nikon 6000 is on its way to the service center again -- its fourth trip in the last year -- to see if they'll fix the latch.  On its previous sojourns to be repaired I have used my second-best camera, my old Olympus, which has coped with easy tasks but isn't up to anything serious such as tricky focus.

But this time I decided to buy a new camera instead of just coping.  After 23,000 photos, who knows how much longer the Nikon may hold out.  Kim the world's greatest camera salesperson told me today that camera hardware does sometimes give up the ghost.  In particular, the gears that open the lens and then extend it to the proper focus are subject to wear, and we're talking about many tens of thousands of operations already completed.  And that's not to mention this Nikon's propensity for breaking.

When I looked at new cameras I decided that what I basically wanted was the same thing I already have -- a small camera that will fit in my pocket.  Kim suggested I look at the idiot-proof models guaranteed to survive being dropped, submerged, nuclear-bombed, etc. but none of them zoom more than 5X, and I've been spoiled with the 7X on my Nikon and don't want to trade down.

So we looked at Nikon's next plateau up, the 8200, a little bigger, a little heavier, with a 14X zoom.  But then I wondered whether I might be happy without going up the food chain, and looked at the Nikon 6200, which is basically my old camera in its 2012 guise.  No new bells and whistles, but three improvements over my June 2010 version:  a 10X zoom instead of 7X, a better sensor, and a lower pricetag.

When we put the 8200 side-by-side with the 6200, the choice was easy.  In buying the larger model, I'd pay $75 for a longer zoom, but wouldn't get any more pixels, any better sensor or any fancy new features.  And it would be a bit more cumbersome to shlep around. 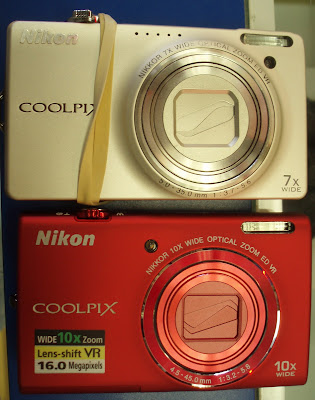 I hope 6200 will be as good as its brother in terms of photo quality and ease of use.  And I really hope it will never acquire its brother's bad habit of visiting the Nikon service center with every change of season.
Posted by Kathleen Loomis at 5:57 AM