If you get a lift out of schadenfreude, you've probably enjoyed my recurring tales of woe regarding my Nikon Coolpix camera.  I bought it in June 2009 and it has traveled with me to five of the seven continents and staunchly taken 23,000 photos.  A real trouper -- that is, when it isn't in the shop.

Twice it's been in for repairs when the eyelids failed to retract fully and expose the entire lens.  (It still took pictures, but they had black triangles at northeast and southwest.)  Once it was in for mysterious spots on the lens, which congnoscenti thought were specks of dust on the sensor but actually were serious enough to warrant a new lens.


The last time it came home from the shop I made a wry comment noting that it still had several months to go on its warranty and wondering what might happen next. 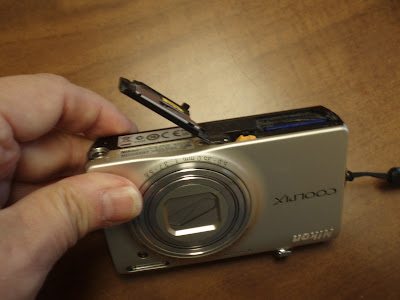 There's a little door on the bottom of the camera that opens up to reveal the battery and memory card.  When you close the door, you slide a button to close the latch.  The latch consists of a metal tongue that slips underneath a thin ledge of plastic.


Except that this morning I found the little ledge of plastic on my desk, right underneath the open door of the camera. 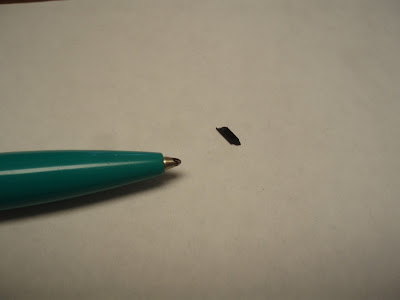 Perhaps if you were designing a camera you would have the latch mechanism made entirely of metal for greater durability, but you obviously didn't design this one.

So here's the camera in its new getup.  Much classier than duct tape, don't you think? 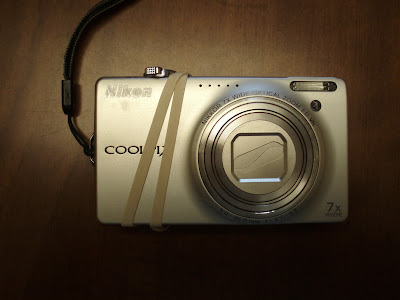 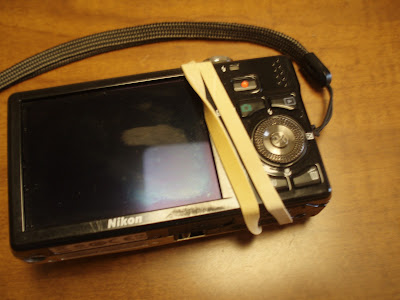 Although it takes pictures just fine, I hate to see those four months of unused warranty go to waste.  One of these days I'll have to visit Kim my favorite camera salesperson and see whether she has the chutzpah to send this back to the Nikon service center yet again.  Or maybe I'll just make lemonade and buy a new camera, one without a jinx.
Posted by Kathleen Loomis at 2:23 PM