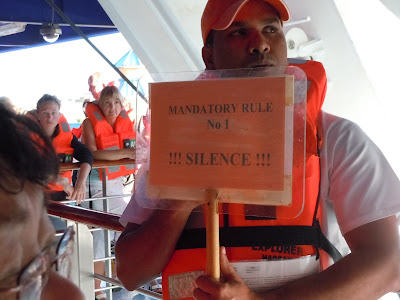 We've just returned from three weeks at sea that took us a thousand miles up the Amazon River.  Our internet access was sorely limited, so I apologize for making no response to many of the comments left on the blog recently.  I'll try to catch up on any loose ends in future posts.

If you've ever taken a ship voyage, you know that the first order of business is lifeboat drill, in which everybody gets decked out in their warm clothing, life jackets and hats and assembles at their boat station.  Although many of the passengers ignore Mandatory Rule No. 1, go to the wrong place, fail to respond when their names are called, and obviously are thinking only about where cocktails will be served, experienced travelers always listen up.

We do so especially diligently in my family, because we can never forget what happened to my parents in 1997.  They boarded the Cunard Vistafjord in Florida headed for Portugal, went to dinner and sailed at sunset.  Late that evening a fire broke out in the kitchen and the crew did not perform as a well-oiled machine; instead they left their stations and passengers were left to fend for themselves as smoke filled the ship and confusion reigned.  I'm not sure whether the lifeboat drill had been held, but if it did, it hadn't accomplished much.

My parents, in their 80s, became disoriented in the smoky corridor but fortunately a high-ranking officer stopped to help and accompanied them on what seemed to be an endless climb to the deck.  Once everybody was in the open, things improved; it was warm enough for people to sit outside through the night in their nightclothes, and the fire was quickly put out.  The ship was diverted to the Bahamas, my folks got two nights in a luxury hotel (their cabin had been right above the fire and was uninhabitable) while the company dithered about cancelling the voyage, and eventually got a free trip to Europe on a later trip.

But the dining room steward who served my parents, and whom my mother had already become friends with, died of smoke inhalation.  Apparently many of the kitchen staff were not clear about what to do in the emergency; Mom's steward and another briefly argued over the best way to escape, and Mom's guy, who knew a shortcut, never made it.

Fortunately our voyage had neither fire nor death nor dereliction of duty.  Although many of us who got sick did occasionally consider the second alternative.  Ken and I both suffered from bad colds, which haven't yet left us after two weeks.  I began the voyage with enough Sudafed to start a meth lab, but we used it all and then some.

I'll have some pictures for you soon.  Meanwhile, it's not too late for a new year's resolution:  always pay attention at lifeboat drill.