More about our visit to the Minneapolis Sculpture Garden.

When we turned the corner into this section of the garden, walled off by tall hedges, I got the long view of this sculpture, just as in the photo below.  It had to be by Richard Serra, the master of rusted steel plates, I thought, but this was so SMALL!  And then I realized that I'm just spoiled. 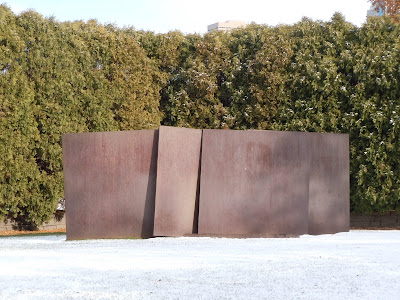 Everything of Serra's that I've seen in the flesh has been on a monumental scale. His torqued ellipse pieces, for instance, which we've seen in New York and Los Angeles, are made from steel plates 16 feet tall. So the "little" sculpture here was a surprise and seemed a bit modest, quietly occupying a corner of the garden. I think I've read that Serra took a long time to figure out how to work with the steel in huge pieces, and this is a relatively early work. 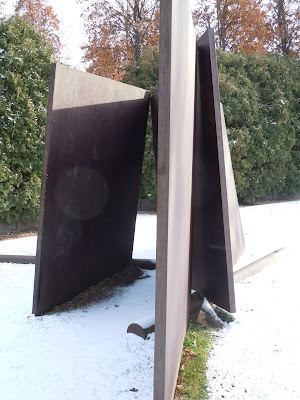 It was fun to walk around the piece and peek at the back side.

Here's a life-size skeletal bronze horse by Deborah Butterfield, looking very much at home in the snow.  I've only seen her sculptures indoors before, where they command their space with height and attitude.  Outside, this one is just as big but less pent-up, probably because he could canter away towards the lake if he felt restless. 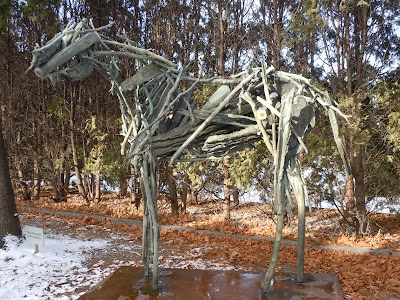 Butterfield started making horses out of sticks and mud.  Later on, she still made them that way, but had them cast in bronze.  I think the character changes as the material gets more noble, even though you can still see the wood grain and stick forms.

The entrance to the garden is marked by two huge stone pillars, cut from a single piece of granite.  I liked everything about them except the title -- Ampersand.  I thought if you wanted to name this work after punctuation you might better choose exclamation points, especially in Spanish where you write ¡Ole! 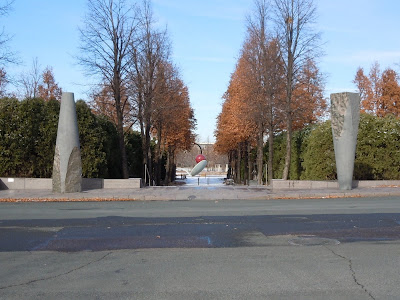 My favorite piece in the Sculpture Garden was made by somebody not generally considered as a sculptor -- the architect Frank Gehry. 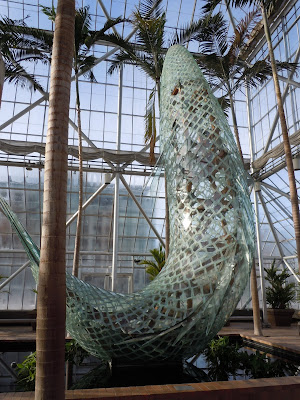 
Gehry explains:  "when I was very young, my grandmother and I used to go to a Jewish market on Thursday morning.  She would buy a carp for gefilte fish.  She'd put it in the bathtub and this big black carp -- two or three feet long -- would swim around and I would play with it.  I would watch it turn and twist... and then she'd kill it and make gefilte fish and that was always sad and awful and ugly."

The glass carp is anything but awful and ugly.  It's 22 feet tall, rearing out of a shallow pool in the conservatory's palm court, getting payback on Frank's grandma on behalf of its species.  Living large is the best revenge.
Posted by Kathleen Loomis at 6:19 AM