Time for another quilt date – this time, with a famous artist. The guy is Ellsworth Kelly, a great American painter born in 1923, known for his hard-edge Color Field work. I have loved his work in many different museums and spent many hours with three or four books of his work. 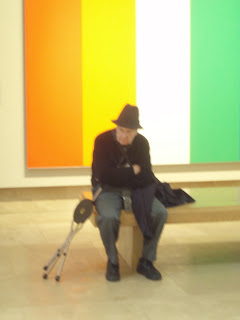 Kelly was a prodigious doodler, as I learned from one book that reproduced hundreds of sketches on little scraps of paper or the corners of newspapers and other ephemera.  One of Kelly’s recurring practices was to cut free-hand strips of paper and paste them into two-color compositions, then slice the collage and rearrange it. Sometimes the resulting compositions were executed as paintings. Seeing several variations on this approach, I was intrigued by how much they resembled quilts – hard edges (seams) between two colors (solid fabrics) in block or column organizational structures.

Ellsworth Kelly -- Study for “Cite”: Brushstrokes Cut into Twenty Squares and Arranged by Chance, collage of ink on paper, 1951 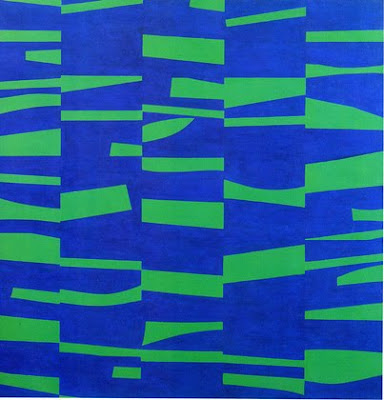 The piece that I used as inspiration for a series of quilts a few years ago resembles the two pictures shown here, but not exactly. Like the blue-and-green painting, it is organized into five columns, but the first column has no “stripes,” only a single color.  (Sorry I can't find a picture to show you.)

I liked this approach and made three quilts using the same plan. To perfectly translate Kelly into fabric, I would have used commercial solids for flat color areas, and I would have used a single piece of fabric for the non-striped column. But I was using hand-dyed fabrics with a fair degree of mottling. And I chose to piece the “plain” column in stripes just like the four other columns, but use the same color fabric for minimal contrast. 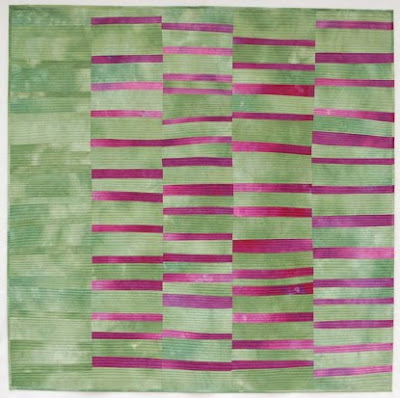 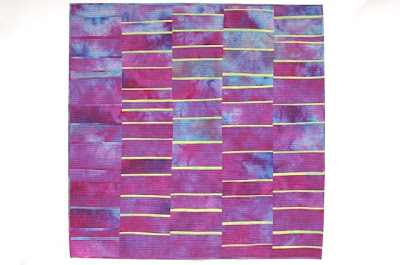 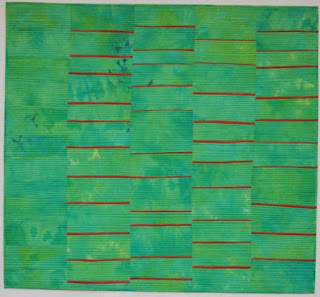 For some reason I abandoned this series before it matured, but when I revisit these quilts I sometimes wonder whether I quit too soon. I particularly like the subtlety of the low-contrast areas in the left-hand columns.

If you’re intrigued by this approach and would like to go out with Ellsworth Kelly, you could either use hand-dyed fabrics and take advantage of the low contrast of piecing a fabric against itself, or be more true to his Color Field nature with commercial solids.

Then you have to decide the following specifications for your quilt:

How many columns? (I suggest either three or five.)

Which (if any) column will be “empty” – with no stripes or low-contrast stripes?

How wide will each column be? (You could work in miniature with four-inch columns, or much wider.  My three quilts had 10-inch columns.)

What proportion will you use for the two color stripes? (The contrast color could be equal in width to the background stripes, or very narrow in comparison, or wider, or anything in between.)

Will you cut your stripes with a ruler, or as straight as you can get them freehand, or curvy? If you choose straight or straightish edges, will your stripes always be exactly horizontal, or will you have some on the diagonal or wedge-shaped? You might want to doodle some of these alternatives before you start cutting, or make sketches by cutting construction paper, as Kelly himself did.

And finally, which two colors?

All three of my quilts were made by constructing the columns independently, then putting them up on the design wall and only then making minimal adjustments if I didn’t like the way the stripes in one column abutted those in the next column. The composition might have improved if I had laid out the entire quilt before sewing the columns together – but on the other hand, it’s very hard to know in advance exactly where a certain strip is going to fall before you have actually sewed it and used up all the seam allowances.

If you like your first date and want to explore this approach farther, just go back to the list of questions and choose another combination of answers. Before I abandoned my series I had actually planned out a half-dozen future possibilities. For instance, I was going to experiment with having the two colors be higher or lower contrast (Kelly’s original was hot pink and orange, so close in value that you could hardly tell them apart) and with having the “empty” column be somewhere besides at the far left. You could make similar changes with any of the other specifications; all the columns don’t have to be the same width, and there are a multitude of different ways to cut a “stripe.”

And you could emulate the first Kelly picture I posted above, by using square or rectangular striped blocks instead of long striped columns.

As always, if you try this date, let me know how it works out. If you want to send me a picture of what you made, I’ll post it.

Posted by Kathleen Loomis at 8:30 AM