Clearly time for me to get back to real life after my magnificent vacation to the end of the earth.  Since I got home I've mainly been doing laundry, unpacking and reading old newspapers, but the gravitational pull of art is starting to be felt.

I know from my art history readings that many artists have come home from vacations with new excitement and outlooks that have changed their entire work.  The young Paul Klee, for instance, famously went to Tunisia with two of his lesser-known artist pals, Louis Moilliet and August Macke.  In only a couple of weeks his brilliant watercolor sketches convinced him that color and paint were far more important than drawing, and he came home firmly pointed in the direction of greatness. 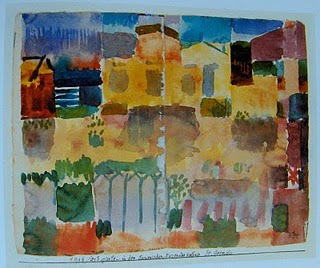 
Unlike Klee, I didn't make sketches on my vacation, just took pictures (would art history have changed if Klee had brought a Brownie with him?).  But I did think occasionally about whether and how the wonderful, exotic scenery of Antarctica is going to affect my art. 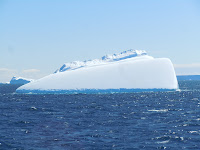 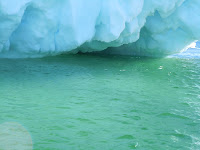 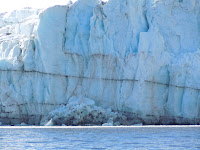 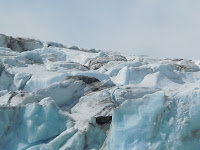 I don't do realism, so that means no adorable penguins, seals or killer whales.  But I have been pondering the icy palette of the polar waters --blue-black ocean, black rock, white snow and ice, gray lines of dirt and rock dust within the glaciers, a huge range of medium and light blues and blue-greens as you get close to floating ice and see the light reflecting back.


I've never worked with this palette before, even though I've been awed to sail amid glaciers and icebergs on previous vacations.  Is it as simple as realizing the pitfalls of sewing on large expanses of white?  Not only can you see every non-white thread or seam allowance on the back side of your quilt shadowing through to the top, but the quilt gets dirty after you manhandle it for a month or two. 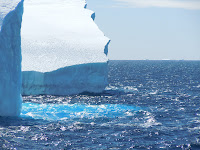 For both those reasons, I wrote last summer about my resolution to never make a pale yellow quilt again, even though I'm pleased to report that it got into Quilt National '11. So would I not only forget my promise but up the ante and go for white this year? Don't know if I'm that dumb. And yet would the polar blues be that evocative without the white to surround and set them off? Probably not.

So I'm going to contemplate ice and what aspect of it might be intriguing enough to work with. I'll let you know when I figure it out!

But meanwhile, I'm interested in your experiences. Have you come home from vacations with ideas that have made major, lasting change in your own art history? Or have you dabbled in souvenir art that faded almost as fast as your suntan? I suspect even world-class artists have had both kinds of responses.

Posted by Kathleen Loomis at 5:20 PM