A change of pace

After working on ice colors for the last month trying to depict Antarctic glaciers and ice floes, I was ready for some different colors.  I knew I needed plenty of fabric to make a huge expanse of piecing, so didn't even bother to look in my big stash of solid colors where the typical piece of fabric might be a yard.  So I went to the store for Kona cotton.

My first thought was to choose two colors very close in value but near-complementary in hue.  I know that combination often causes the pattern to vibrate and shimmer.  I had made a small quilt with that plan and sent it out in public recently, and wanted to replicate the effect at a much larger scale. 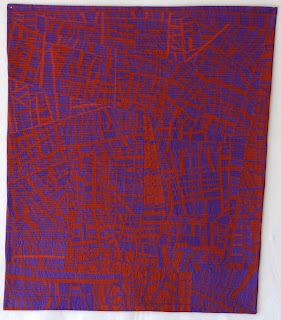 
But I couldn't find a combination that worked.  I think the store was awaiting a shipment because many of my favorite colors were absent without leave.  No good rich purples, no  darkish blues.  I looked in the medium values trying for something that would go with some nice browns, but wasn't inspired.

So how about a total change of pace -- hot orange and hot pink?

Several years ago when I had a big crush on Ellsworth Kelly I saw a tiny photo of something he had made; I don't even remember if it was a painting, a print or what.  The photo was about an inch square, just big enough to get the general idea of the design.  In fact, I stole (rather, adapted) the design and made three quilts from it, and may go back and do more in the future.

What stuck with me was not just the design, but the colors -- hot orange and hot pink, so close in value that you almost couldn't tell where one stopped and the other started.  And here they were on the shelf, and they passed the shimmer test, vibrating before your eyes.

So I loaded up on them, came home and started sewing, without even stopping for lunch.  When inspiration strikes, you want to get on with it.

My design plan is to sort of replicate Gridlock, except a lot bigger.  At this stage I'm sewing modules more or less a foot square, except they're mostly not square.  Almost all of them have strong diagonal edges, which means it will be a pain in the butt to get them to fit together in the end.  But that's a problem to deal with in April or May.  For now, I just want to sew. 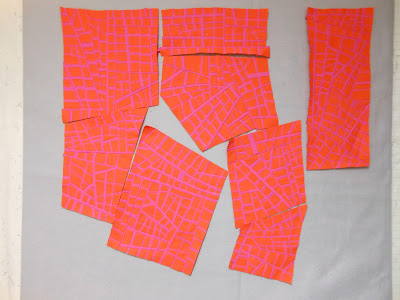 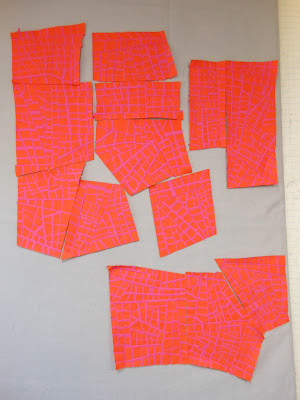