Designer fabric lines -- good or bad?  Much discussion on the Quiltart list this week on this subject, sparked by reports of a lawsuit.  Seems an Author wrote a book illustrated by various quilts she had made, but the credits failed to mention that a certain quilt was made from fabrics designed by a Designer.  The Designer sued for copyright infringement.

As most lawsuits are, this one was settled, with the Author's Publishing Company agreeing to credit designers in similar situations.  But the discussion raged.  A lot of outrage, and some comments that it makes you want to give up using commercial fabrics entirely if that's the way they're going to be.

I was one of the many people who commented how it would be impossible (at least for me) to credit the designers of the commercial fabrics I use.  Many of the fabrics in my stash were purchased years ago, and many have been long since divested of their selvages.  I often slice off the selvages soon after purchase, or later if I need selvages of a certain color.  And that's not to mention the fabrics that arrived from somebody else's scraps and leftovers, or those that were recycled from an old dress.

But as the discussion proceeded, it got worse.  The defendant in the lawsuit revealed that she customarily receives fabric free from manufacturers, because she makes quilts that appear in books and magazines.  Apparently the quid pro quo is that she lists them prominently in the credits.

Then another would-be author revealed that she had approached a publisher with a book about (among other things) using fabrics from your stash to achieve good color, texture and contrast.  The publisher told her, "you'll have to re-make all of your examples with current fabrics because people only want to see what's available now....not what has been taken from your stash."

Someone else pointed out that fabrics have a shelf life only slightly longer than that of fish, and that many people appear at the fabric store with a magazine article in hand, only to be crushed to learn that the fabrics in the picture are no longer available.

I am deeply discouraged by this situation.  I have encountered a lot of beginning-to-intermediate quilters whose sewing skills are well developed but who have no confidence in any aspect of design, whether it's developing their own compositions or choosing their own fabrics and colors.  It has been my objective as a teacher to liberate quilters from ever having to use other people's patterns, and I have realized that I need to broaden that objective to also liberate them from having to use other people's fabric palettes.

I recognize that it may be good business for everybody -- publishers, fabric manufacturers, authors, designers -- to participate in this daisy chain of mutual promotion.  But the losers are the quilters who are encouraged at every turn to outsource their fabric selection to the design sensibilities of somebody else.

I've mentioned in this blog that I am working on a book that seeks to help beginning-to-intermediate quilters develop confidence to make their own designs.  I've made six new quilts in the last couple of months to illustrate the book, using fabrics from my stash, and have also found at least a half dozen in my pile of old quilts that use the same concepts referenced in the text.  I guess it's a good thing I'm going to self-publish rather than be told that I'd have to remake everything with currently available fabrics.

If the fabric manufacturers, the publishers, the designers and many of the authors are all in collusion to get people to go mindlessly to the store and buy WHAT'S NEW, where will the innovation come from?  How will the artists emerge from the muck?  I guess it's up to us independent voices, the bloggers, the self-published authors, the artists who stay out of bed with the power structure, to cry in the wilderness that you can escape.  You can learn to choose your own fabrics and patterns, you can work from your stash, you don't have to buy WHAT'S NEW (and for that matter, maybe you don't have to buy anything at all!!!!). 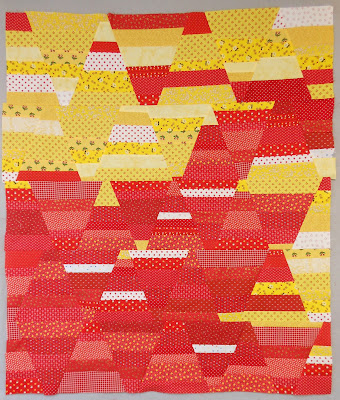 Just finished this quilt top earlier this week as an illustration for my book -- everything came from the stash, some of it is decades old.  Shame on me  (but I like it...)
Posted by Kathleen Loomis at 7:00 AM