I've been trying for several weeks to make a piece of art consisting of pennies I have found on the street while I walk.  My vision is clear -- the pennies are suspended from a grid of thread that hangs from a wood piece.  But executing that vision has turned out to be a flaming pain in the butt.

Plan A was to stitch the grid by hand onto a foundation of Solvy.  I put dots on the Solvy to show where the pennies should go, then I sewed around the pennies with blanket stitch. 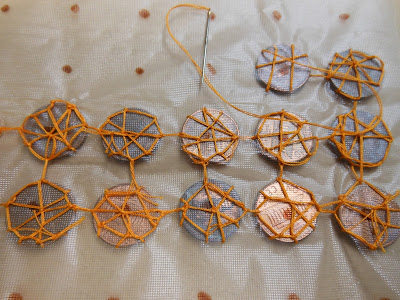 After I did a dozen or so I became disillusioned.  The stitching seemed messy and I wasn't sure it would actually hold the pennies in place after the Solvy was washed away.

I cut the pennies away and moved to Plan B.  This time I would switch to the sewing machine and make a base grid on the Solvy, then stitch around each penny.  That seemed to work just fine, until I dissolved the Solvy and realized that several of the pennies had slipped out of their cages.  Besides, I didn't like the way the Solvy was behaving -- it didn't want to totally dissolve, and the pennies and the thread were decidedly slimy no matter how many times I rinsed. 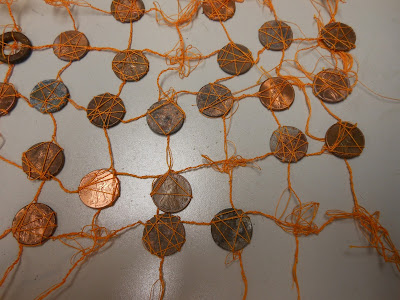 Plan C.  I decided to stitch the grid out of a sturdier cord, without Solvy.  At each intersection I would sew a little square of tulle, just barely smaller than the pennies.  Then I would hand-stitch a cage around each penny, stitching into the tulle behind it to hold the shape and prevent the cage from slipping around and the pennies escaping. 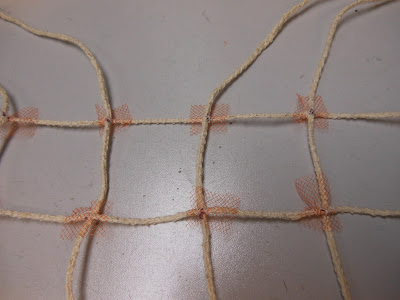 I didn't even get one penny stitched on before I realized this wasn't working.  Despite the tulle, which was supposed to serve as a foundation, the cage wouldn't hold its shape as I stitched.

Plan A was looking pretty good by this time.  Why had I abandoned it anyway?  But I had a lovely base grid finished, and it seemed way too late to go back.  I need the piece finished in the next couple of days for a show that opens on Friday.

Plan D.  The DIY slacker's friend: the hot glue gun.  Last night I glued the pennies to the grid.  I guess a true slacker would just declare victory and attach the grid to its armature.  But I'm not sure the glue will hold, and besides, I have always wanted the look of the pennies "tied up" to the grid with some kind of stitched cage. 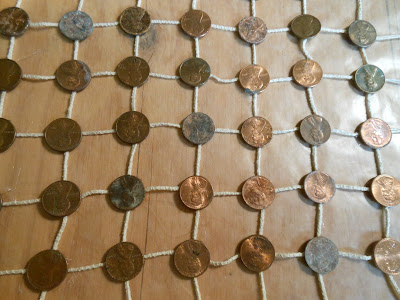 Today I will return to the general concept of Plan A and attempt to hand-stitch them more securely.  If that doesn't work, I guess I'll think about Plan E.