I've written through the summer about an installation at the Kentucky Museum of Art + Craft in which volunteers mend or embellish garments brought (or worn) in by visitors.  The project bears the name of a certifiably Famous International Artist, Lee Mingwei, but he was only there to oversee the setup before leaving town for a big career retrospective in Taiwan, his birthplace.

Since then, the art, or performance, or whatever you want to call it, has been conducted by the locals, including me.  I've been a bit doubtful all along as to the worth of this project; read about my angst in previous posts here.  Last week I was required to consolidate my thoughts in preparation for a program at our local fiber and textile art group.  Ramona Lindsay, the education director of KMAC, is also a member of our group and she participated in the discussion, which gave us a view from the other side of the institutional landscape.

We all agreed that "relational aesthetics," the critic-speak for this kind of art installation, is something that traditional museum-goers may not understand.  It's very postmodern, with "art" being defined far more broadly than the making of objects; now "art" includes a wide variety of encounters between artists and others.  This may go over just fine in Brooklyn, where the hipsters are up on postmodernism, but not so much in Louisville.  Not only is our proportion of postmodern hipsters much lower than Brooklyn's, but we're applying the proportion to a much smaller population.

Lee envisioned that the encounter would be a meeting and conversation prompted by the presentation of a garment to be mended, and while the mending was going on, bonds and connections would be forged.  But that's not what happened.  Most of the actual mending we did was on garments brought in by museum staffers (who couldn't sit and talk with me) or sent in by our own friends to be mended in absentia. 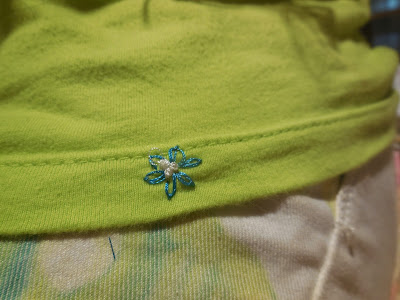 Ramona said at the program that the staff and curators had been closely tracking the way the project was morphing into Plan B, and they were happy about the way the visitors were responding.

I asked her to take back a challenge to her museum colleagues: why not do a similar project again, except eliminate the high-priced Famous International Artist and just contract directly with the local volunteers, who were doing all the work.