Volunteers at the Mending Project kept a log of what we did, and one of the first things I would do when arriving for a shift would be to read the log and see what happened since I was there last.  One afternoon I read the following: 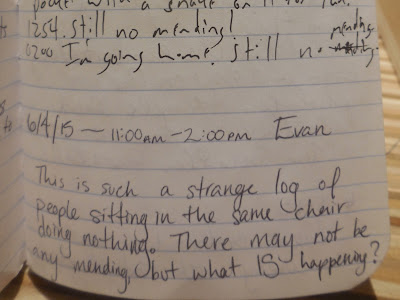 "This is such a strange log of people sitting in the same chair doing nothing.  There may not be any mending, but what IS happening?"

Great question.  As I was thinking about it, I noticed that somebody had brought in a bunch of upholstery swatches; in fact, I used one to patch a pair of jeans that had been left on the table. 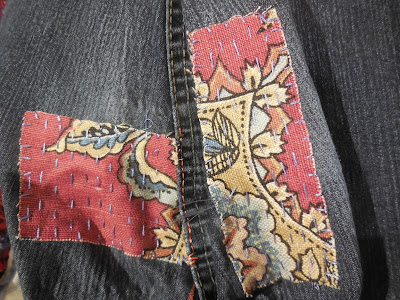 I had an idea: I detached one of the small swatches and started to stitch on it, and left it with a challenge to the other volunteers: 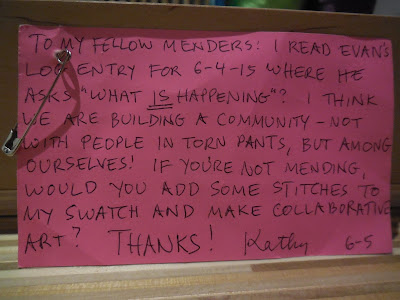 "To my fellow menders:  I read Evan's log entry for 6-4-15 where he asks "What IS happening?"  I think we are building a community -- not with people in torn pants, but among ourselves!  If you're not mending, would you add some stitches to my swatch and make collaborative art?  Thanks!"

And over the next three months, they did, turning the busy but drab swatch into an explosion of color from the shiny mending threads.  By the time the show closed early this month, the swatch looked pretty flashy. 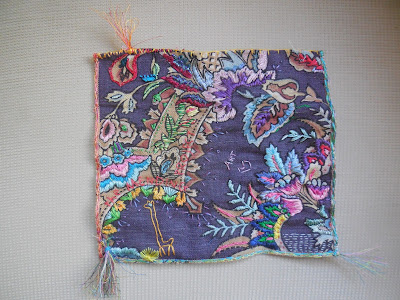 
Posted by Kathleen Loomis at 5:07 AM