Second in a series


I wrote yesterday about a new piece that I made by heavily machine-stitching onto heavy fabric that I then folded and sewed into a pyramid.  Immediately I started on another one, working to improve the technique.

In #1 I noted that it was hard to get the heavily stitched fabric to stay in a crisp fold, so my plan was to build the folds into the fabric, so to speak.  Instead of cutting a single fabric base that would have to be folded into the pyramid, I cut the shape into four separate triangles and sewed them onto a lightweight fabric.  This way no matter how heavily I stitched over the fold lines, they would be much thinner than the rest of the form and presumably fold much more easily. This new technique also has the benefit of being "layers held together by stitching," which is good enough to get you into most quilt shows, whereas #1 wouldn't qualify. 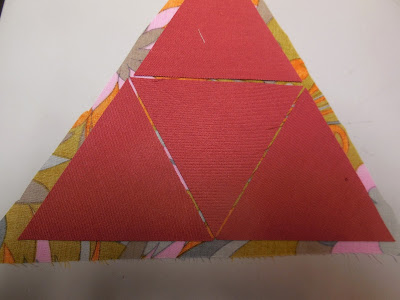 I also noted that the cut edges in #1 were a little messy -- no matter how enthusiastically I stitched over the edge there were little eyelashes of cut threads sticking out.  So in #2 I folded the edges of the lighter weight fabric over the heavier, ravelly base fabric at the very beginning so that subsequent stitching would secure a totally ravel-free edge.

I liked the effect in #1 of laying down a contrast color and later covering it with lots of stitching in my main colors.  Rather than find scraps of contrast fabric, in #2 I simply chose a print fabric with several different colors. 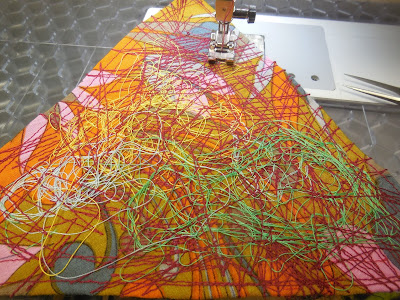 At an early stage of the stitching, I searched through all my spools and bobbins and found those with just a little bit of thread left, then piled the threads onto my pyramid base and stitched them down.  It almost doesn't matter what colors you use at this stage; it's like underpainting, in which you will see only a slight hint of the color after the top layers of paint go on. 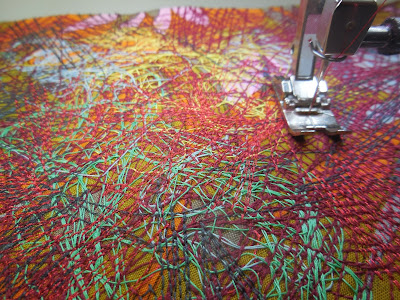 Here I've laid down all the contrast colors and am starting to overlay them with red, which is going to be the main hue of the finished pyramid.
Posted by Kathleen Loomis at 5:59 AM