I belong to an art book club that hardly ever reads books.  We used to, hence the name, but stopped some time ago and now we do "whatever" according to each month's theme or subject.  Some people might report on what they or other artists have done on that subject or bring in relevant books, others might put together slide shows or photo suites on the subject, still others might make a piece of original art.

If you choose that last response, of course, it usually turns into a big project -- often a bigger one than you had intended at the start.  And that's what happened to me over the last month.

Our theme was "early and late" -- ambiguous, yes, but that sometimes makes for the most interesting discussions.  I stewed for a while over what to do, but then came up with the idea to look for the words "early" and "late" in the newspaper, cut them out, and do some kind of compilation.  I did that for two weeks or so, and then it was time to start actually compiling. 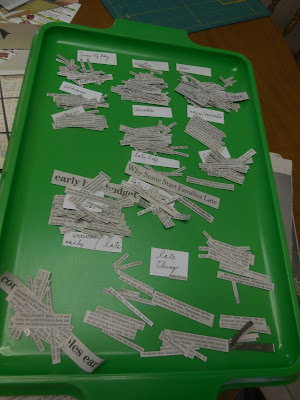 Last week I claimed the kitchen table for my workplace, and spread out, cutting the words more neatly out of the clippings and sorting them into theme piles, such as minutes (a few minutes later, ten minutes earlier, twenty minutes later...) and centuries (the late 18th century, the early 20th century). That took two days.  Then started pasting them into a little accordion book.  Fortunately the design of the book was such that it was easy to add four new pages at the end if I decided I wasn't finished yet.  This occurred several times. 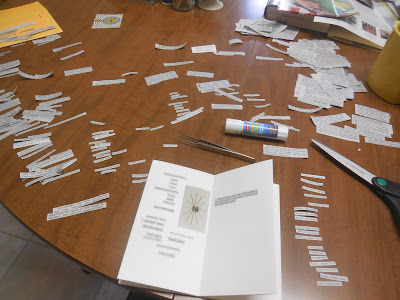 An  experiment: go to your newspaper and find a single word or perhaps a two-word phrase that you want to put into a little book.  Cut it out -- pretty little, isn't it?  Did you find it hard to even hold onto the paper when you got to the last cut?  Did you drop the little piece after that last cut?  Can you find it again?

Now paste it into your little book.  Still pretty little, isn't it, and now it's covered with glue!  How are you even going to peel it up off the scrap paper?  How are you going to position it perfectly in your little book?  (Answer: needle-nose tweezers.)  Wash your hands frequently, because they're getting all black with ink and sticky with glue.  All this is time-consuming.

If you love fiddly little projects like this, as I do, you will find yourself slipping into a zen state, happily cutting and sorting and pasting as the hours and days tick by.  I found myself contemplating the subtle differences in meaning between "late in 2014" and "in late 2014," between "fifty years earlier" and "fifty years ago," between "her latest husband" and "her late husband." 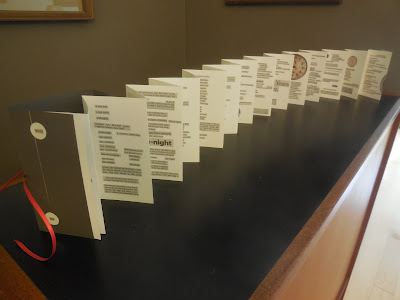 Many of the pages resembled poetry, such as this one:

at a later date.

All told, it took a week of working time to get the book finished.  And then, a couple of hours later, I found a phrase in the newspaper that I just had to cut out and put in the book... and then the next morning, two more....

The whole book has 29 pages.  Here's a look at some of them: 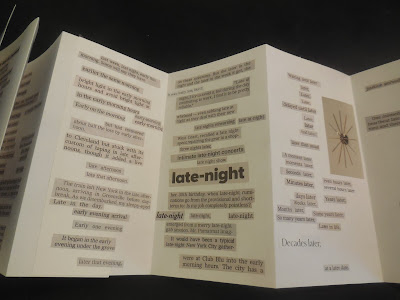 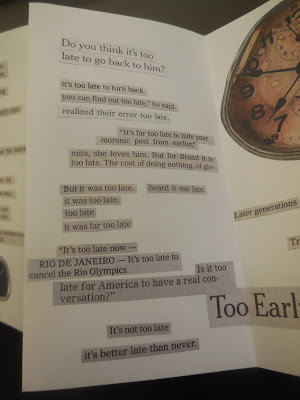 It's going to take me a while before I can read a newspaper without those words leaping out at me.


Posted by Kathleen Loomis at 5:11 AM