Cleaning the studio (sort of)


I will be teaching a workshop in curved piecing in October and the organizer wanted a sample that she could show at the August guild meeting.  That would be easy -- I have two or three quilt tops made with exactly the techniques that will be in the class, made at a long-ago Nancy Crow workshop and never quilted, but excellent for teaching purposes.

At mid-week I went to find the box with the curved pieces in it.  So easy, you might think....

I'll fess up, I have a messy studio.  Every year or so I get the urge to clean it up, and may devote days, weeks, even months to the task, but even the most enthusiastic efforts only put a small dent into the problem.  Often looking for something is the impetus I need to make a major assault, but the minute I find it I stop.

I thought I knew where the box was, but it wasn't.  Then I started looking into one box after another, searching.  I found all kinds of other things, and decided life would be better if I reorganized them and labeled the boxes with detailed inventories so it would be easier to conduct future searches.  Some of the things I found wanted to be given to friends: a bunch of beautiful polyester prints in dress lengths will go to the refugee/immigrant sewing class, a huge bag of wool yarn from Scotland that I never should have bought because I don't knit will go to my friend who does.  Some stuff I even threw away.

By now my recently clear worktable was entirely silted over.  One box was receiving neatly folded drapery-weight fabrics to be used for quilt backs.  Three were receiving works in progress, plastic-bagged and inventoried and sorted by some system almost clear in my mind.  One was receiving leftovers, plastic-bagged by quilt, all color-coordinated and ready for the next (smaller) piecing project.

I came upon a big bag of wooden spools that somebody had given me and took a break to put them on display in a type case on the wall that had some empty spots.  I came upon two dozen small pieced motifs from a workshop that I had for some reason pinned to background lengths of fabric.  I unpinned them, carefully sorting the pins back into my pin dish if they were still smooth, into a plastic box if they had rusted in place and needed a going-over with an emery cloth, bagged and packed the motifs, folded the background lengths and put them back in the box with the solid Konas.

At the end of the day some things in my collection were better organized, packed and labeled.  Some things were in process, awaiting future decisions.  Still others were in worse shape than they started, having been let loose but not yet grappled with.  And I still hadn't found the box with the curved piecing.

So I made a new sample and took it to the post office just before it closed. 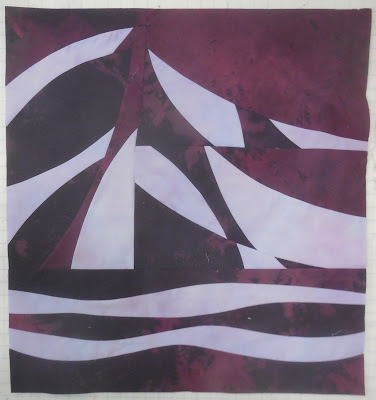 Today I guess I have to go back in the studio and confront my unfinished business.  Want to bet that within the next two days I'll find the box with the curved piecing?