Faithful readers may recall that I've been working on my three entries for Quilt National since early spring, and that all three are American flags in varying degrees of attenuation.  I am thrilled to report that I have finished the third quilt, and after a bit of remedial stitching on the first one to make it hang better, I will be ready for photography.  And practically a month ahead of the September 1 entry deadline!

Here is #3 on the living room floor, the only horizontal surface in the house big enough to hold it. 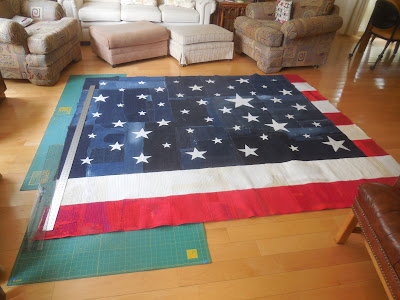 All three of the flag quilts were exercises in using leftovers.  The ingredient list includes:

- a red blouse, almost sewed 25 years ago but never completed
- many pairs of blue jeans, contributed by members of my local fiber and textile art group
- an old white lab coat, contributed by my art pal Paula (snatched from her doctor husband)
- an old huck towel, with holes, contributed by my art pal Marti
- a piece of the ancient linen purchased in Europe by my art pal Joanne who graciously shared her treasure with me
- all the leftover bits of batting from years and years of quilts, some pieces almost big enough for a small quilt, others as small as an inch or two wide
- all kinds of fabric, acquired god knows how or when, that weren't worthy of staying in my stash
- red and white tulle from my stash
- various pieced samples, made by me or others, that never graduated to being used in a finished quilt
- an old patchwork pillow, made in 1971 and used so hard it wasn't fit for anything; I took it apart and discovered that it had been foundation-pieced onto a white dish towel, which became a white stripe
- leftover bits of white fabric trimmed from various projects over the decades and never thrown away
- shiny polyester thread left over from last year's Mending Project at our local museum, contributed by my art pal Ramona, who works at the museum and couldn't bear to throw the stuff away
- many, many, many spools of my own leftover thread, much of it so old that the quilt police would tell you never to sew with it.

Here's what the back of quilt #2 looks like, with all those leftovers: 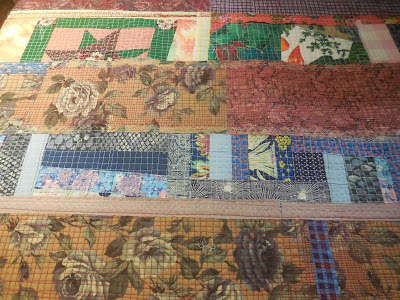 Here's what I purchased new for the three quilts:

I am sorry to report that I also bought four spools of blue thread at a clearance sale, thinking I would use them on the third quilt, but I didn't like the way they looked and never used them.  So I guess I'm a good ten bucks in the hole on this project.


Posted by Kathleen Loomis at 5:16 AM