A few weeks ago I wrote about a little book that I made with words clipped from the newspaper.  My dear internet friend Margaret Cooter left a comment on that post saying "I am fighting hard against the idea of stealing this idea."  I subsequently wrote a post encouraging anybody to steal my idea, or any of my ideas.

But I really got a laugh out of Margaret's comment about stealing ideas, because a few days earlier I had stolen an idea from HER blog.

She was writing about a printmaking class she took, and showed work from other students in the class, including this print.  For some reason, the gray ghost images called out to me. 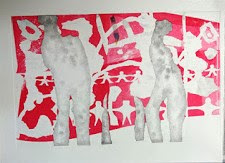 My sketchbook happened to be within arm's reach of my computer, so I pretty much copied the figures for my daily drawing.  Before I had finished, I realized two things: that I saw these people as Adam and Eve, and that I was so taken by them that I would be drawing them over and over. 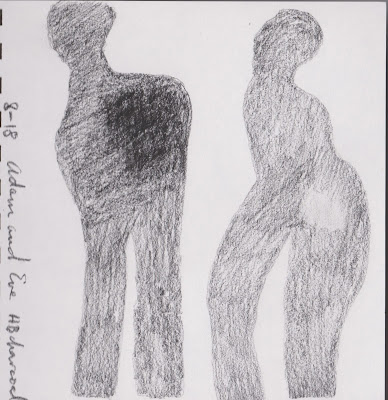 That first Adam and Eve was on August 18, and I've been drawing them exclusively for more than a month now, with no end in sight.

This sudden love affair is surprising me.  I have never had much desire to represent the human form in any medium, and I struggle in my monthly session in which we draw from a live model.  But something about these primitive figures, with no arms and no features, made me think I could draw them without fear of them looking stupid.

Since then I've been experimenting with every different pencil in my box, trying to achieve different effects of shading and outline.  I haven't varied the forms much but often the figures want to be much bigger than the page. 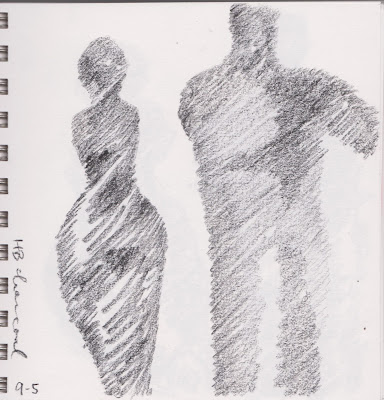 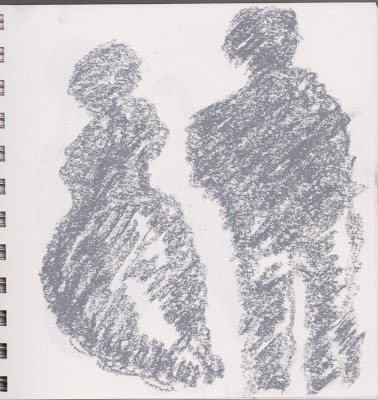 Sometimes I draw only one of the figures; I'll show you some of them in my next post. 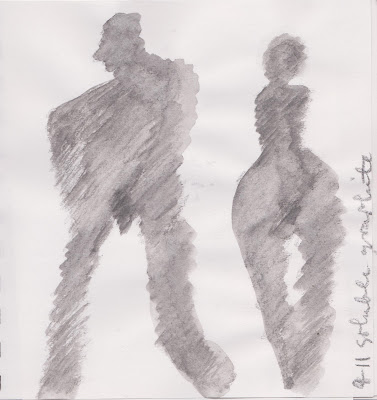 Meanwhile, back to the original thought: stealing ideas.  I don't think there is such a thing.

Ideas are out there in the cosmos, circling around our heads in a huge swarm.  If one chooses to sting you and infect you with its virus, you're no less sick because that same idea bit somebody else last week.

Posted by Kathleen Loomis at 5:43 AM