Don't fail to miss this show


The Speed Art Museum, our local establishment, has a big show that opened last weekend, and I went to the festivities.  The subject was sneakers.

You might wonder what this has to do with art, and why it's in a museum.  You would not be alone.

My art pals and I thought maybe there would be art related to sneakers, but no.  Instead there were sneakers.  Three rooms full of sneakers, each pair exhibited importantly in vitrines with extensive info on the signs. 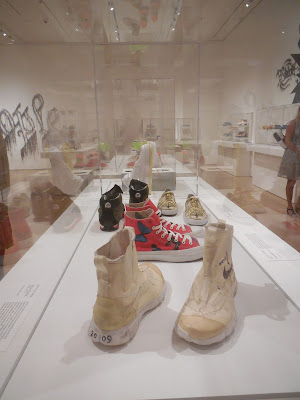 I  don't know about you, but this information doesn't do much for me.

The shoes weren't displayed with much imagination.  For every pair that got tipped up to show the fancy sole -- 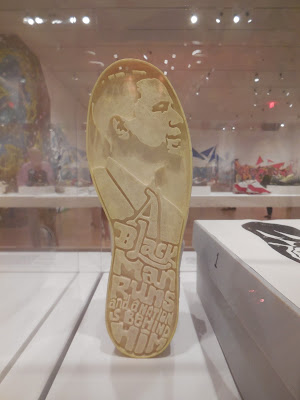 like these commemorating the election of President Obama -- there were two pairs that just sat there like lumps on a log.  The pair below was supposedly special because it was designed by Christian Loboutin, complete with red sole.  Which we had to imagine. 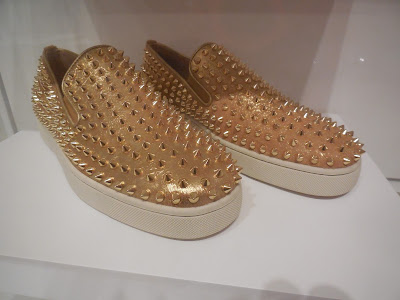 This next pair supposedly had "insoles printed with a unique water graphic," which again we had to imagine. 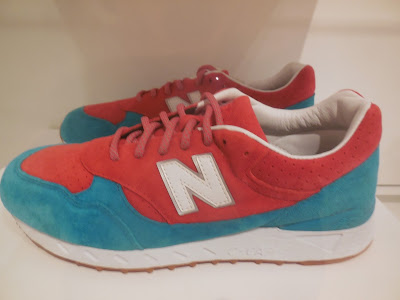 There was one piece of art, which I liked. 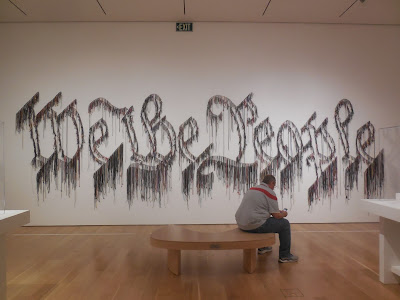 Nari Ward, We the People (detail below) 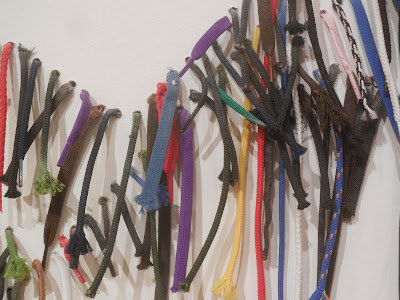 But I wonder why a show in an art museum didn't include more art.

I know that in recent years fashion has become the great hobby of the rich and famous; "supermodels" are rich and famous themselves, while movie stars and other celebrities jostle for front-row seats at the designer shows.  Who wins the Oscar is only slightly more important than who wore what to the ceremony.

Mainstream museums like the Met have had blockbuster shows in recent years showcasing the work of famous designers, but that's in a town where fashion is still a huge economic sector.  I have to wonder who in Louisville KY really cares about sneakers. Yes, we have more than our share of basketball fanatics, but I wonder how many of them will make their way to the art museum, especially if they have to pay $8 to get in.

After we saw the exhibit, I said to my friends, this is a two-fer: it demonstrates all that's wrong with American society (where sneakers can go for thousands of dollars and kids can get killed for their shoes) and it demonstrates all that's wrong with American museums (where all kinds of trendy, expensive objects can be deemed art and displayed with a straight face next to the Rembrandts).  To get the bad taste out of our mouths, we went out and got ice cream on the way home.  It was the highlight of the evening.