I haven't been accomplishing much in the studio since the first of the year.  Lots of meetings and writing from the two art groups I'm on the board for, lots of time on organizing and cleaning out the studio and throwing away decades worth of crap, lots of baby time.  But little in the way of art.  I really must find a project and get started on it before the Olympics, so I can work while I watch.

Two weeks ago I thought I had found a project that was going to keep me busy for a while.  I wanted to make a piece so heavily machine-stitched that it would start to bend and ripple.  I wanted to use some of the dozen-plus cones of pink polyester embroidery thread that I inherited from the museum, just on general principles that when you have a dozen-plus of something you should try to use it up.

So I made a quilt sandwich, covered the top layer with scraps and bits of various pink fabrics, and started sewing.  It didn't take long before I realized that first, I wasn't enamored of how it looked, and second, it would take years to finish the piece to the size I had originally thought.  So Plan B: I cut off a small panel and finished stitching that very densely.

Then I cut a piece of paper to that same size and experimented with folding and rolling it, looking for a geometric shape that might be attractive.  I thought it might complement the one stitched pyramid that I have left after our gallery sale last summer (at top right in the photo). 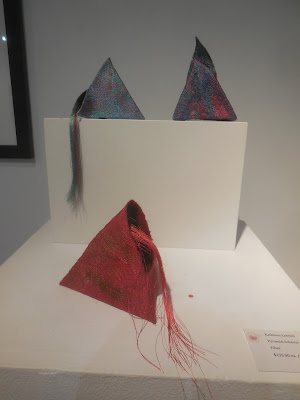 Maybe a cone?  But that would reveal the back side of my stitching, which wasn't very attractive.  I folded and rolled some more, came up with nothing interesting and got discouraged.  Finally I decided to heck with it, I wanted to be done with this failed experiment.  I stitched the two ends of the rectangle together, then turned it inside out to make a cylinder.

Well, oops.  The piece had gotten so stiff and bulky, between that full quilt sandwich and the stitching, that I had to fight it all the way just to get it to turn.  But I kind of liked the lumps and wrinkles that ensued.  The bottom edge had a binding of peach silk, left from our kimono stash, but the top edge was raw, so I turned it inside and sewed the top shut.  This made it about six inches tall and three or four inches wide. 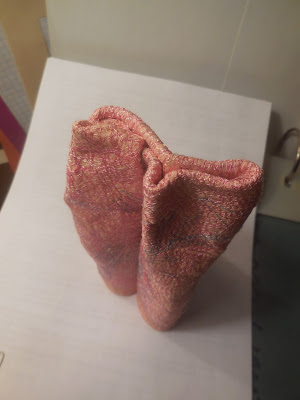 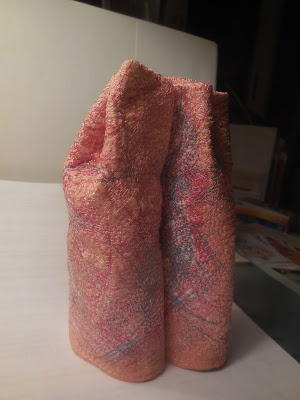 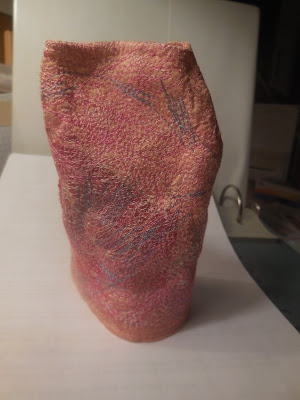 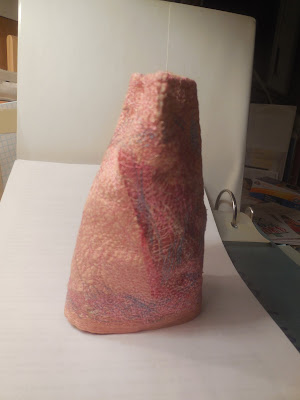 So is the experiment a failure or a success?  I think maybe some of each.  Plan A certainly didn't work, but Plan B may have some promise (as in so many other aspects of life and art).   I love to stitch, stitch, stitch all day so the process works for me.  I like the beat-up, bumpy look.  I don't think I like the cylindrical form all that much, although in some of the views it's intriguing.

Maybe I'll try another one and try to repeat what I like in the first version, avoid what I didn't like, and figure out a way to make it technically easier.  I'll let you know how that works out.