Many times I've participated in discussions of how difficult it is to announce to the world -- and maybe even harder to announce to yourself -- that you are an artist.  I vividly remember the first time I said that to another person.  Strangely, it was probably five years after I had announced to myself that I wanted to make art.  I had become comfortable with that idea, and that wording, but the next step was still hard to take.

I announced that I was going to be an artist to a woman sitting next to me on an airplane, one week before I retired -- my last business trip.  She said something like "that's nice."  The world did not end because the word "artist" had crossed my lips.  This surprised and reassured me.  I soon tried it out again on somebody I knew.  Pretty soon I could say it without even stopping to think whether it was OK.

This memory was prompted by a blog post written by Alisa Golden, an excellent book artist who has recently decided to also make quilts.  She talks in this post about two qualities that enable people to describe themselves as artists (or writers, or calligraphers, or any other kind of non-credentialed but esteemed calling).  The qualities are proficiency and identity.

If you're not sufficiently proficient, compared to others whom you clearly regard as artists, then it should be difficult to call yourself an artist, and if you are, then you should be able to claim the name.  But proficient in whose eyes, Alisa asks.  In your own eyes? In those of others?  And which others count?  Your mom may have thought you were an artist since age four, but her opinion probably doesn't count as much as the opinion of an art professor.

Then comes identity -- whether you feel that you are a member of the group.  Clearly you have to feel like an artist before you can call yourself one.

I like Alisa's breakdown of the situation, and if you have struggled with this situation, or are struggling with it now, you might like to read her entire post.  But I am particularly intrigued with her last remark, "These days, I'm working on accepting a new term for myself: quilter."

Perhaps it's because I live in a region where traditional quilts were part of the culture, and are still highly prized and widely made.  So many times, when I would say the Q word to describe my work, the response would be "Oh, my grandmother made quilts!!" and then I would have to explain that my quilts were not like those, that they belonged on the wall and not on the bed, that they were made by machine and not by hand, that they didn't use traditional patterns. 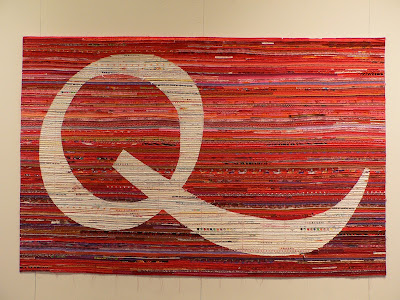 I'll make a Q quilt, but avoid the Q word

And within the wider world of art, I have often felt that quilters, unless they come from Gees Bend, are not regarded as "real artists." So for a long time I have most comfortably called myself a fiber artist, and tried to avoid the Q word altogether.  But even that seemed to have a faint aura of second-class citizenship within the wider world of art, so for the last few years I have pretty much dropped the word "fiber" too.

Alisa's right -- it all comes down to identity.  We all have our strange ways of feeling and expressing that, and one person's take can be quite the opposite of the next person's.  How do you describe yourself?  Was it hard to reach that point?  Has your chosen nomenclature changed over the years?