If you want to sew S-curves or even more complicated curves, you probably need more precision than you can get from the just-sew-it approach described in the last blog post.  Instead you need to establish a seamline and cut seam allowances on either side.

You don't need to go all quilt-police-traditional and make templates to accomplish this, but you do need a way to make a copy of the curve that will become your seamline.  Why not do templates?  Because you would lose the spontaneity of the freehand curve and change the character of your improvisational composition, and also because exact templates are so fiddly and time-consuming.

Instead, here are two methods of making your curves fit together perfectly while keeping the freedom of the immediate free-cut line.  I call them semi-templates.  You don't need to cut templates to accomplish this, but you do need some way to "remember" your curve so you can add seam allowances as you cut.

The first method uses a template, but it's a free-cut template with a minimum of tedious fuss.  Start with some pattern material that's big enough to draw your entire curve, and a cutting mat big enough to let you do it with one swoop of the rotary cutter.  The pattern material can be freezer paper, newspaper, interfacing or tissue paper.  Lay it out on your cutting board.  Take your rotary cutter and slice a gorgeous curve through the pattern.  If you want, you can stop there, or you can cut more curves as long as they don't cross any of your previous cuts.

(In the photos below I've made four cuts, the start of a large "striped" panel that can keep on going as long as I want. After these pieces are sewed together, I'll have to retrieve the template paper with the curved edge of 5, then make more cuts for more pieces.) 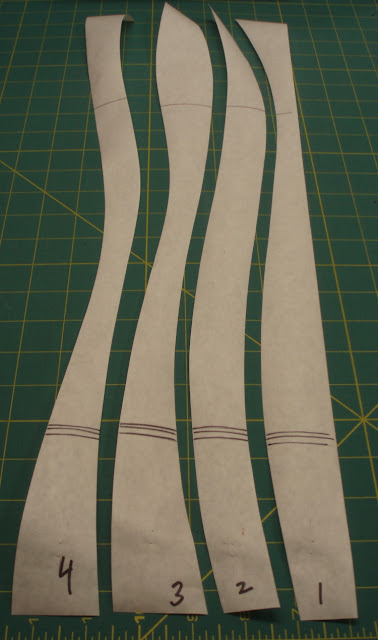 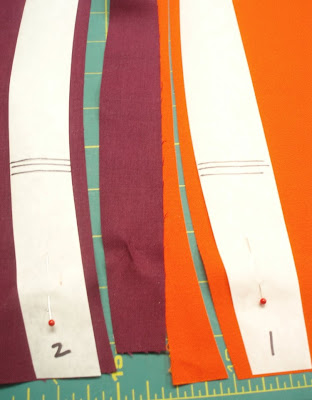 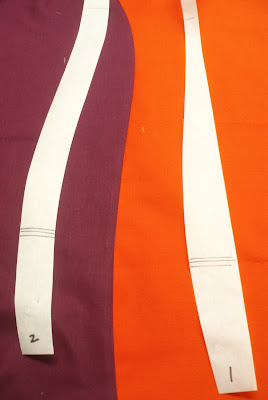 Look at that beautiful curved seam!  Now put template #1 aside, get templates #2 and #3 and repeat the process for the next curve. 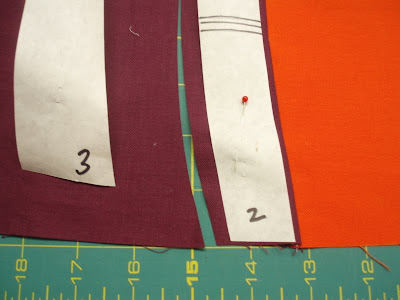 Place template #2 right up against the seam, and cut along its left edge, adding the seam allowance by eye.  In this photo template #3 is waiting, but I will actually cut it from a third piece of fabric, not maroon.

With this method you can make curve after curve, as in this quilt of mine.  With some practice you can use this method to make winding-road seams with multiple changes of direction, as long as you mark and pin the seams carefully. 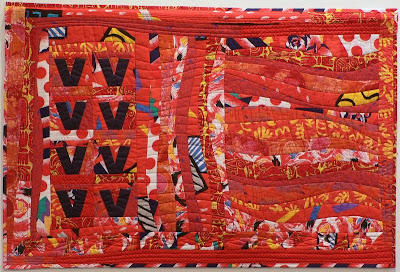 A variation of this method uses a marking wheel to draw your curved seamline directly onto the two layers of fabric, thus eliminating the template.  If you're not familiar with this tool, it's like a rotary cutter except its "blade" is dull, not sharp.

Instead of using the rotary cutter to make your curve, you use the marking wheel, which works exactly like the rotary cutter, with the same arm motion that gives you those nice, loose, artistic swoopy lines. 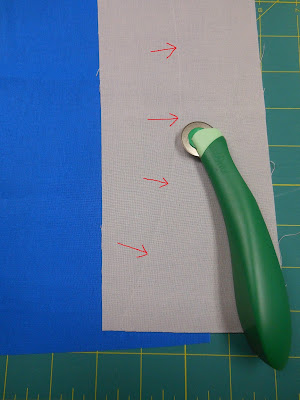 Layer two pieces of fabric where you want the curve to go, giving yourself plenty of fabric underneath (you don't want your curve to run off the edge of the bottom layer).  Limber up your arm and make a swoopy curve, pressing hard enough to crease both layers of fabric.

The creased lines don't show up all that well in the photos but they do in real life, at least long enough for you to cut and sew as needed. 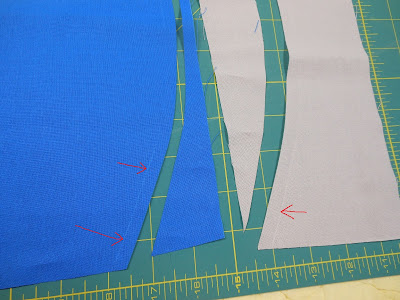 Now separate the two layers, noting carefully which direction you need to extend for seam allowances. Switch to a rotary cutter and by eye, follow your creased curve a quarter-inch away.

As you did with the paper templates in the first method, put one or two marks across the seams and pin them so you match the curves before stitching.  The more complicated the curve, the more places you should mark and pin.

In the next post I'm going to tell you to press your seam allowances toward the outside of a curve.  That's great with a C-curve, but how about an S-curve?  The "outside" may be toward the left as you start, but then the curve changes direction and "outside" is toward the right.  I can't give you a hard-and-fast rule for these situations.  If one leg of the curve is more gentle than the other, press that one toward the "inside" so it will become the "outside" when the going gets tough.  If all else fails, flip the direction of the seam where the curve changes direction.  Use your best judgment, and plenty of moisture and elbow grease at the ironing board.

Posted by Kathleen Loomis at 3:31 AM