Quilts in the newspaper


I'm late in catching up with the newspapers, struggling with jet lag, but I just read an interesting art review in last Friday's New York Times.  It seems that William Arnett, the famous discoverer/promoter of the Gees Bend quilters and other black Southern outsider artists, has begun to give away the artworks collected by his foundation.  The Metropolitan Museum in New York received one of the first such gifts, and has a big show of the work through September 23.

In a glowing review, Roberta Smith, the Times' chief art critic, gives high praise to several of the best-known Gees Bend quilts on display, including one from the famous U.S. postage stamp series.  The show also contained several pieces by Thornton Dial and other artists who made sculptures from discarded tools, metal, tarps and other junk. 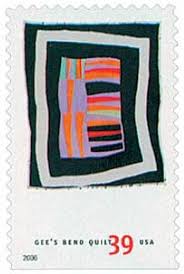 in the show:  Loretta Pettway, Medallion

I was happy reading this review -- the quilts were regarded as art.  But towards the end of the review, the critic just couldn't help herself from falling into the same old stereotypes.

She devoted four column-inches to a discussion that started "It is de rigueur when writing on exhibitions of this kind to review the shortcomings of the terms used to allude to the vast body of art... created by people limited by racial inequities, poor education, mental or physical challenges, or poverty" and ended with "Let's just call all of it art and proceed."  (If you're going to just call it art, why go through the litany of "shortcomings" and the recital of the politically correct terms used to describe the stuff?)

She points out that "self-taught" as a descriptor "didn't work since many artists are self-taught in some way.  (Quilters, for example, learn their art from their female relatives.)"

Oh, Roberta!!!  Couldn't you at least have said "some quilters"?  You're obviously unaware of the huge industry of quilt instruction, and I'll forgive you that, but do you really think that quilting is still a homespun craft carried on in a log cabin or sod house?  And that quilts are inseparable from grandmas?

At least she called us "artists."

Posted by Kathleen Loomis at 10:32 AM