Just as sewing curved seams is a bit trickier than straight seams, pressing is also a bit more worrisome.  But with any kind of seam, you should get into the habit of pressing as a two-step process.  First press lightly from the back side, then turn the work over, check that the seam is good from the front, and only then press enthusiastically.  You want to find and fix any problems before you set them in with lots of pressure and moisture. 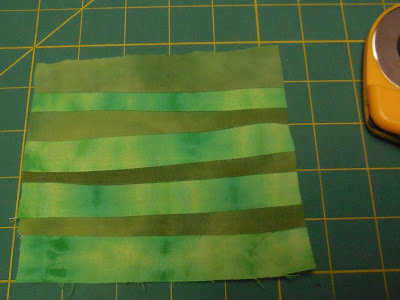 If you have sewed parallel freehand strips into a larger module, as in the block above, wait until you have them all stitched before you press anything.  Then sweep your iron across the entire set, pressing all the seams in the same direction in one swoop.  Fabric has a lot of forgiveness and will usually ease itself together nicely even if the edges aren't mathematically exact.  But it seems to lose a bit of flexibility every time it's pressed, so the first time is always the best.  If you have to return to a finished module and add more curved strips, spritz your existing seams well with water before you press in the new seams.

With more pronounced curves it is important to press the seam allowances toward the outside edge.  It's easier to get fabric to spread out under the iron than to get it to squeeze in and still stay flat. 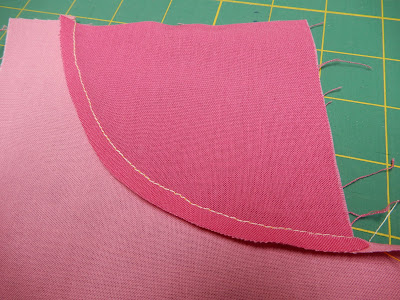 When you press toward the outside, the dark fabric gets to keep its exact original shape; the seam allowance on the lighter fabric has to spread out a bit on the edge to lie flat.  Not a problem; fabric is usually willing to stretch. 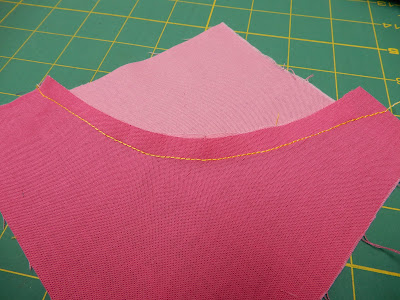 When you press toward the inside, the dark fabric gets to keep its exact original shape and things look good from the back.  But underneath, the lighter fabric has to squeeze in to make the extra fabric fit. 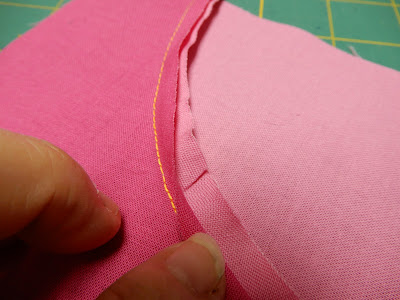 Sometimes this will work out just fine, but sometimes, especially with very tight curves, the underneath fabric can't squeeze in enough and instead it forms pleats.  A problem.

No matter which way you press, you may come up with the occasional extreme situation where there seems to be just too much or too little fabric in the seam allowance.  If you have sewn garments in a past life, you may be tempted to get out your scissors and cut notches in the seam allowances to make them lie flat, just as you would do at the underarm of a set-in sleeve or at the curved edge of a patch pocket.  Please overcome that temptation!

Instead, try pressing first with plenty of moisture and see if you can encourage the fabric to stretch out and lie flat.  If it still resists, you can get your scissors, but instead of cutting slits in toward the seamline, cut around the edge parallel to the seam to reduce the width of the seam allowance and see if that works.  You can safely cut to within an eighth-inch of the seamline on a quilt that's intended for the wall; stick with a quarter-inch if you plan to use and wash the quilt.  If all else fails, it's better to make several slits that stop at least an eighth-inch shy of the seamline than to make a few that go all the way in.

One last word about pressing: we all were brought up to think that pressing occurs on the ironing board.  But quilters would be better off using the ironing board for fabric storage, as I do, and making another surface to actually iron on.  That's because it's important to have your entire piece lie flat as you press.

As soon as your piecing outgrows your ironing board, you're only able to get part of it to lie flat, and then you have to shift it around.  What frequently happens is that each segment is indeed flat, but the whole thing isn't -- just as you are able to press a garment in flat segments, even though the whole dress curves to fit your body.

So make yourself an ironing surface on your work table or a countertop or even on the floor.  You don't need fancy metallic ironing-board cloth; an old mattress pad, wool blanket or two thicknesses of a towel will do very nicely.


Posted by Kathleen Loomis at 5:22 AM