I wrote recently about a SAQA exhibit called "Forced to Flee," about the world refugee crisis, that I wanted to enter.  I spent much of the summer making people out of old quilt fragments, enjoying the bedraggled, faded and distressed quality of their clothes.  I decided to enter this competition because 3-D work was encouraged, and my first thought was to stand the people on some kind of base, arranging them either in lines or in a crowd.  So I constructed each one around an armature of aluminum wire that could be inserted into a hole in the base. 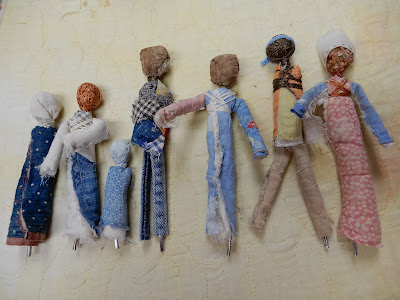 When I visited my art pal Paula Kovarik in September I had my bag of quilt scraps and people with me, to work on during spare moments, and when I dumped them out on the table to show them to her, she thought it might be more powerful to just have them in a heap.  "Huddled masses" should come to mind in this presentation.  The more I thought about this suggestion, the more I liked it.  That would also make it easier to ship the piece if it were accepted.

But I didn't want them to be lying down in the heap, implying they had died or given up; I wanted them to be alive and looking us in the eye, holding us to account for what happens next.  That argued for displaying the people on a vertical support, emerging from the wall like a bas relief.  I happened to own some pre-stretched canvases that weren't actually canvas, but burlap, and thought the rough texture was appropriate to the subject matter. 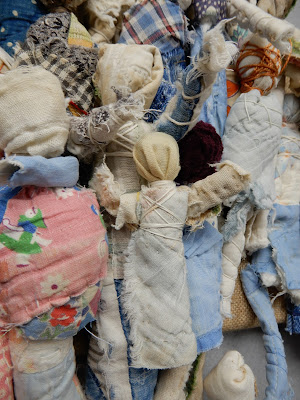 I checked my supply and found two 12x12s and one 8x16.  The short, wide one seemed to be best, and I started to arrange the people on it.  Then I quite by accident went back and read the call for entries: the minimum size was 12x12.  That seemed to rule out the 8x16 canvas.  So what next?

I rearranged the heaps.  One 12x12 canvas was too small for the number of people I had made; two of them seemed too big.  Too late to make more people -- I had had to wait till my show was open before I could finish the project.  The  opening was Sunday afternoon; the entry deadline was Wednesday night, which wasn't a lot of time.

Finally I had a brainstorm: use the 8x16 canvas and let one guy be falling off the bottom, at least 4 inches worth! 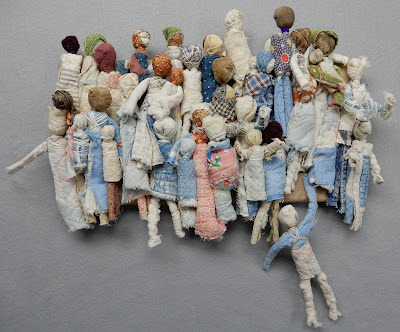 As I sewed the people to the canvas I ended up not only with one guy falling off the bottom but several sticking up above the top, so the finished height was 17 inches, well above the minimum.

Interestingly, the most difficult thing about photographing the entry was to get a side view, required of all 3-D work.  Although I had a big piece of gray felt -- 45 x 72 inches -- for my photo station, it proved very hard to get the whole piece into the frame without also getting annoying background where the felt ran out.  That took an hour on Wednesday evening, as the clock ticked, but I got everything done and hit the "submit" button four whole hours before the deadline.

Now comes the part that always seems unnecessary -- waiting six weeks for the juror to make up her mind.  Now that online entry programs do all the sorting and recordkeeping for you, there doesn't seem to be any reason why show organizers can't have the juror ready to go the week after the entry deadline, and make decisions a few days later.

I think the six-week turnaround is a holdover from the olden days when show entries used slides, which had to be manually taken out of the entry envelopes and arranged in trays, and reshuffled as the juror(s) narrowed down their choices.  And the high-end shows that bring multiple jurors into town for in-person presentations still need more time for human logistics, if not photo logistics.

But why should we be tied to six weeks lead time when the only non-computerized task is for a juror to sit down at a computer screen for a day or two?  Just wondering.