Last week I wrote about Claire Henderson, who just finished a quilt she started in my workshop at Quilting By The Lake in 2017 and sent me a picture.  I looked back in my files and found some pictures I had taken of her quilt on the design wall, and it was interesting to see how the composition changed during the workshop and then at home.

Vickie left a comment: "I do love seeing the process.  I keep resolving to take and organize photos of my process, and add comments and reflections.  But, then, I think I'm too busy to stop and do that.  I've got to find a designated time for this.  Do you have any suggestions?"

Well, yes, I suggest you figure out a way to do it!  I firmly believe that understanding your own process, both the methods and techniques you use to make art and the way you come up with your ideas, is one of the major skillsets of the serious artist.  Maybe there are artiste savants out there who simply channel the universe into art without thinking about it along the way, but most of the artists I admire and respect don't do it that way.  They are able to articulate and recall what they have done in the past, so it's easier to plan ahead, solve problems and incorporate new ideas into their practice.

Vickie is right that there are two kinds of documentation: photos of the work as it progresses, and comments about how, why and how well you did what you did.  Of the many ways you can accomplish this, there's just one thing that absolutely has to be done RIGHT NOW as you work, and that's to take pictures.  So my first suggestion is to get into the habit of taking a lot of photos of what's happening on the design wall.

Making new habits is most effective one step at a time, and step one is really easy -- keep a camera at hand as you work.  Fortunately many people are already in the habit of carrying a phone on their person even when moving around their own house; if you aren't, then make a point of taking the phone or camera with you into the studio.  At the very least, take a picture of your design wall as you leave for the day.  And if you're working on anything complicated, take more -- you can't anticipate when your composition might fall prey to a gust of wind, a helpful toddler or playful cat, or when you lose your place between the design wall and the sewing machine.

(In the age of digital photos, there's no such thing as taking too many pictures.  When I snap the design wall as I close up for the night, I take two or three shots.  Why skimp?  You can always cull out the duplicates, or the ones out of focus or too dark.)

You can't go back and take a picture of what you had on the design wall last week, but you can always organize the photos later.  I was embarrassed, when Claire emailed me last week, to find that I had no folder for the QBL workshop.  So I went back and searched through everything I had taken in July 2017, pulled out the ones from the workshop and filed them where they should have been all along.  Two and a half years late, but now all is in order.  You should aim for a higher standard; maybe once a month?  once a year??? 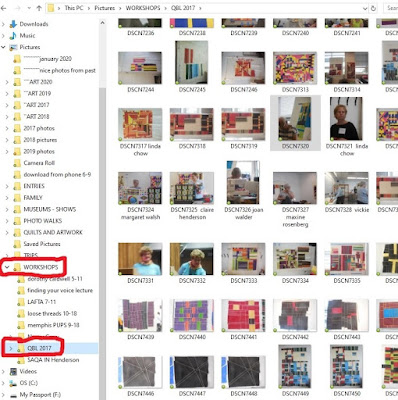 Tomorrow I'll talk about the second part of the process, keeping track of your thoughts.  Too bad there's no way to just shoot photos of what's going on in your head, and organize them later!

Posted by Kathleen Loomis at 5:23 PM