I knew I would use this someday...


A long time ago -- 20 or 25 years?? -- I acquired a batch of Melody Johnson fabrics with Wonder Under already applied.  I have no recollection of how they came into my possession, although I took a workshop from Melody once at the Lancaster quilt show.  But none of the pieces strike a chord, and the designs that were already cut and put together don't seem like the kind of designs that I would have made.  I know I have never made a quilt with these fabrics. 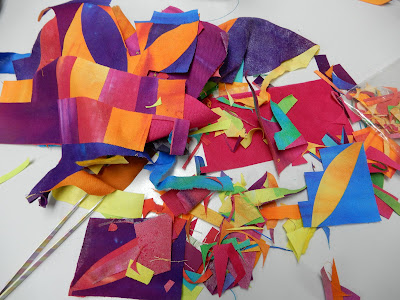 Maybe one of my quilt pals passed them along to me, knowing that I'm a sucker for bags of bits and pieces.  In any case, they have sat in a neatly labeled shoebox in my studio for decades.  Even though I hate fusing, I didn't want to throw them away, because you never know. 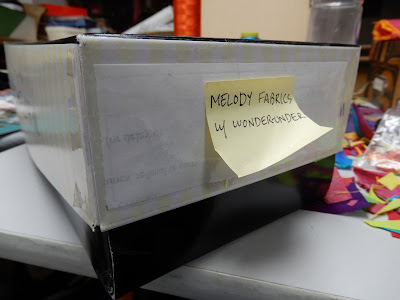 And today, I knew!

I wanted to make a postage stamp quilt with letters of the alphabet, to replace the one that I just sold in December.  But I remembered how fiddly it was to make that quilt, and then -- strike of lightning -- remembered that box full of beautiful hand-dyed fabrics all ready to fuse.

So I spent an hour or two cutting out the letters, but then instead of painstakingly holding each bit in place with tweezers while feeding them through the sewing machine, I just fused them to the background and proceeded to zip through the actual sewing at 60 mph knowing nothing would slip out of place. 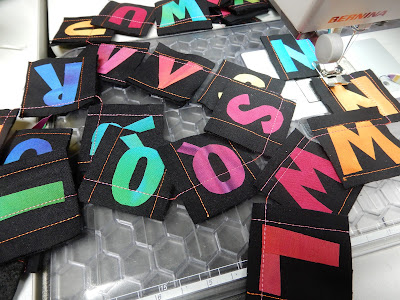 What is the moral of this story?  To throw nothing out, because you never know?  To label your boxes clearly so you can find them 20 years later when inspiration strikes?  To keep your mind open to methods and techniques that you generally disapprove of?  All of the above? 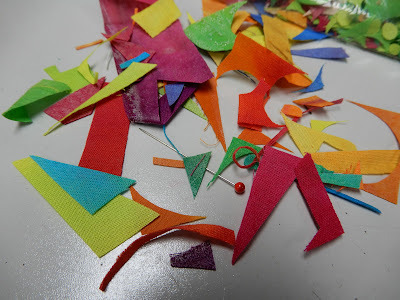 (And if you think I'm going to throw out all these tiny bits and pieces, some smaller than an inch, you're wrong.  Because you never know.)
Posted by Kathleen Loomis at 10:14 PM