How many times have you attended a workshop, made a good start on a quilt or other project, went home intending to wind it up posthaste -- and then time passed....

It's happened to me a lot, and sometimes it has taken a decade or more to get around to finishing the piece.  (Often what I do with it bears little resemblance to what I thought I would do with it when I left the workshop.)

But today I want to share a project from Claire Henderson, who took my workshop in improvisational piecing at Quilting by the Lake in 2017.  Yesterday she wrote me: "I finally quilted and faced my big project from the class.  I still like it and it was the first piece I pulled out for my New Years resolution to finish more things I start!  Thanks again for a fun and most important to me, serious and useful class."

Yesterday, when she sent me a picture of the quilt that she just finished, I looked back in my files and found that I had photographed the quilt in process.  Here's how she started out, making strip sets from her chosen palette: 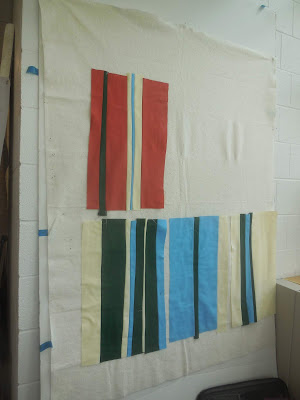 The next day she was cutting modules from the strip sets and putting them up on the design wall: 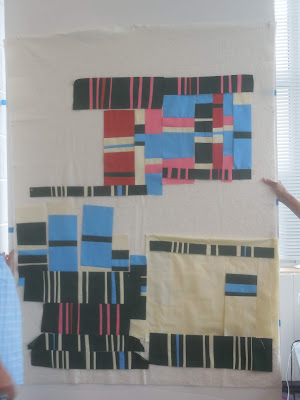 By the end of the workshop, she had the quilt pretty much composed on the wall: 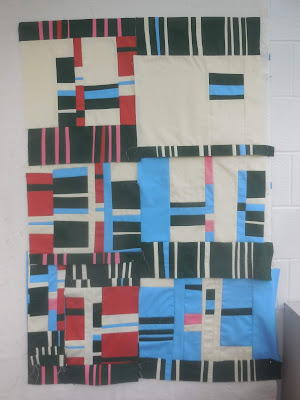 And here it is all sewed, quilted and faced: 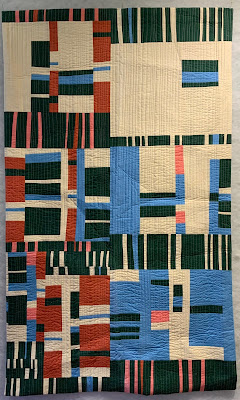 I find it interesting how the big white square with the little green/blue/green patch in the middle was sketched out so early in the process, and how, with a little tweaking, it survived into the final quilt.  Also that the white and blue are the only ones of the five colors to survive into large expanses in the final version, while the red and green ended up sliced and diced into much smaller pieces -- and the coral is only an occasional accent bit.

I've always been a big fan of taking lots of photos as your quilt takes shape on the design wall.  Not only does it help you reconstruct if a big wind or a toddler takes everything down, or if you get confused between the wall and the sewing machine, but it gives a view into your thought process.

Thanks, Claire, for sharing!

Posted by Kathleen Loomis at 12:30 PM