Several years ago the newspapers were full of some sordid scandal and I announced to my husband that I was not going to read another word about it.  Instead (I made this part up on the fly in mid-rant...)  I was going to read every word written about ... Ebola.  And I followed through on both promises.  Since then I have become quite the aficionada of epidemics, Ebola or otherwise.

So I have been following the coronavirus story closely, and especially when it hit the two big cruise ships, because I also love cruise ships.  I knew I had a tie to the Westerdam, the ship that was finally allowed to offload its passengers in Cambodia, because it's the identical twin to Zuiderdam, the Holland-America ship that we have sailed on three times in the last couple of years.  But silly me, it took a long time before I realized my even stronger tie to the Diamond Princess.

In 2015 I took a tour to Japan that was mostly on board a Princess Line ship, and when Diamond Princess was first quarantined in Yokohama Harbor a couple of weeks ago, I wondered offhand whether that was our ship.  But I didn't get around to researching that question until this afternoon, at which point I found, in my folder of photos from that tour, this one of our ship at a pier: 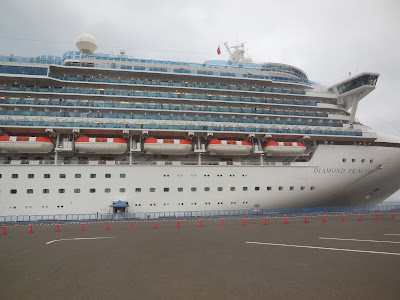 And here, one of our lifeboats: 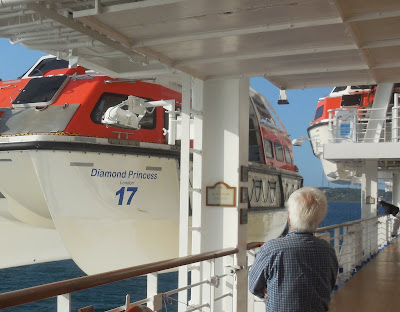 Yes!  that's the death ship!  (As of this afternoon two of the passengers have died of the virus, and more than 600 passengers and crew are infected.)

In case you're wondering what it would be like to be quarantined on a cruise ship for two weeks, here's what our cabin looked like: 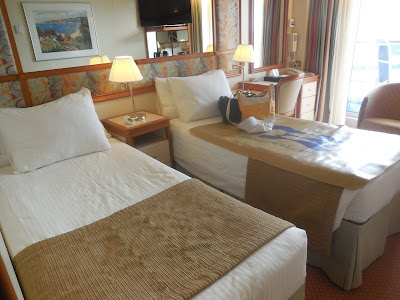 There was a spacious closet and bathroom: 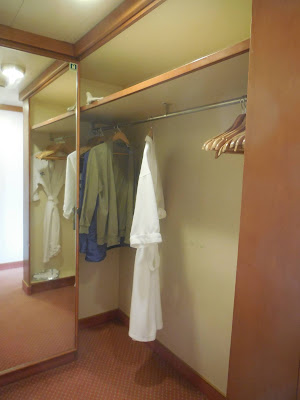 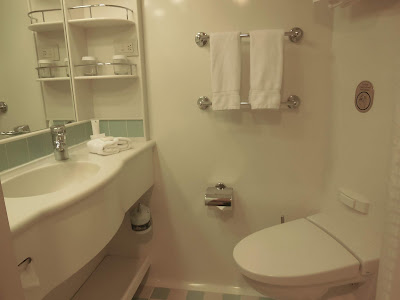 And a balcony, with the same view of Yokohama Harbor that the luckier quarantined folks had.  A good argument for upgrading to a balcony cabin: if you ever get stuck on a death ship you can at least get some fresh air. 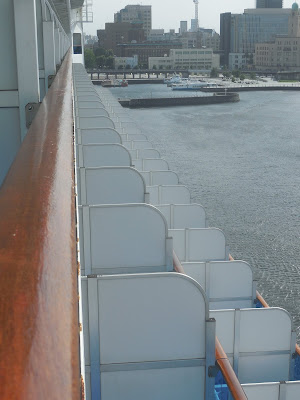 We're on the mailing list for the cruise lines we've sailed with in the past, and every day we get a new message begging us to sign up for another voyage.  They've lowered the deposit to $25, are offering free internet, free drinks, and practically free base fares.  Despite my ghoulish slurping up of every word written about coronavirus, I'm really tempted to sign up for another cruise -- nothing is so exciting as being on a ship as it leaves the dock and sails away to somewhere else....
Posted by Kathleen Loomis at 6:00 PM